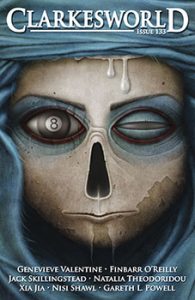 A little while back, after I had ditched reading Analog, I was getting print copies of Asimovs and F&SF but they weren’t really doing that much for me, and the one print magazine I looked forward to getting was the monthly Clarkesworld Magazine which I could get via Amazon and their POD service. Sadly that service isn’t available any more.

One of the reasons I looked forward to Clarkesworld Magazine was the gorgeous covers and the general feel of the magazine compared to the flimsier Asimovs/F&SF (whose covers at times were a little sub-par, although perversely, the cover from the issue in which this story appeared isn’t quite as much to my liking as usual). Another reason was the quality of the fiction in Clarkesworld was generally top notch.

And here, O’Reilly, an author new to me, provides some top notchery indeed. Possible the pick of this chunky volume so far, and I am quite far into the volume. I bemoaned the previous story for whizzing through and explaining everything as it went along. Here O’Reilly leaves the reader guessing for just a little while.

SPOILERS AHEAD The setting is near future, but something is amiss in the oceans of the world, and we find out it something to do with squids. Cthulhian monsters from orbit perhaps? But O’Reilly gradually teases out what has happened (genmod creatures we have built to rid the oceans of the plastic we have choked it with, but which have rather gotten out of control). Very well told, and altogether a pleasure to read.

One thought on “Finbarr O’Reilly. The Last Boat-Builder in Ballyvoloon. (Clarkesworld Magazine #133 October 2017)”