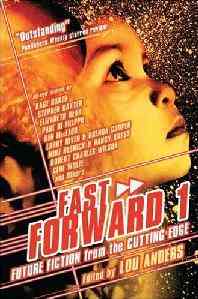 Set in the same milieu as the well-received ‘The Cartesian Theater’, a post-Scarcity world, with AI’s and robotics taking on a lot of the load of running society, with a dilettante humanity with leisure time to spare.

The protagonist is an artist of a little fame, the son of much more famous artist parents, with their work, and his, making physical works of art from data sets/

In seeking medical help for his incapacity to dream (perhaps the cause of his artwork having just that something special) he finds his muse in the data-set recorded at a sleep research institute of someone who is a vivid dreaming. The work of art he creates from that data-set is much better received, and he resolves to meet his muse to see what further inspiration he can draw from her. However, whilst she is a dreamer, the young woman has her feet firmly on the ground and is able to take him for a ride, his only consolation being that for a while he was able to dream about her.

It’s a subtle and well-written piece, the only problem, reading it a couple of years on, being that a post-scarcity world now seems very much a science fictional conceit!

Justina Robson. The Girl Hero’s Mirror Says He’s Not the One.

Set in the aftermath of Robson’s novel ‘Mappa Munda’, in a world in which the benefits of nano-enhancements to the brain have been somewhat off by viral attacks to the uploaded software.

It’s a stange world, on in which being a Girl Hero means a jaunt across the world to off a criminal before getting back home for supper. However, this mission doesn’t go well when the intended victim is very much set against playing his allocated role, causing her to consider the role of free will and ideas in their world.

An altogether darker, bleaker story. Childbirth is a victim of the chemical and toxic crap that has been going into the environment, with a high risk of major in-utero deformity, and we follow a traumatic birthing of something with little claim to humanity, and the high price paid by those wishing to secure a healthy baby.

Robyn Hitchcock. They Came from the Future.

Plotters being young guy gamers recruited to work in space identifying incoming meteorites on paths likely to cause havoc, and Shooters being their companions of a much higher rank who are skilled and priveleged enough to be in charge of shooting said meteorites down. It’s not a healthy environment, all those geeky young guys encamped in a small spaceship, and the Shooters make is worse by dressing up as manga/comic book type heroes, and getting the lower ranks to act as fags as in Tom Brown’s Schooldays. One new recruit bucks the system, as tends to happen in this kind of story. It doesn’t quite have the depth that I’d like to see in a Year’s Best story, and reads more like juvenile SF – as compared, say, to Ian MacDonald’s story below.

If you think Windows Vista is bad…. Ballantyne postulates computer operating systems that are able to do more than simply respond to input, but rather shape the environment from which that input comes, to best suit its philosophical underpinnings and worldview.

A young girl is given a Bose-Einstein quantum chip to treat her neurological condition. However, whilst in hospital for the treatment, she finds out about auto-erotic asphyxiation. In trying this out, she finds that rather than an enhanced sexual state, she is transported somewhere far different. Are her conversations with a very alien creature on a clearly alien planet simply a fantasy?

Her mother has faith in her, which gives this last member of a dying alien race the opportunity to download their archives into the girl, very much changing her forever.

A strong complement to Baxter’s ‘Last Contact’ (collected in Strahan’s annual collection), and with a similar fin-de-siecle theme. Here a man visits his widowed, dying mother in her last days, and finds himself being drawn in, literally, to her belief that things come to an end for her have implications for those around her.

A.M. Dellamonica. Time of the Snake.

The arrival of a squid-like alien race on Earth has precipitated a global conflict, with one side allied to/colluding with the aliens. In an operational sweep through downtown LA, a human/squid military unit are flushing out civilians and trying to spot those who are pretending to be civilians but who are in fact the enemy. And in a basement in one building, several layers of identity/alliance/treachery are revealed.

‘Kath and Quicksilver’ appeared in Asimovs in August 2005, featuring two protagonists who have to deal with the expanding sun’s threat to Mercury. That story appealed to me, and this follow-up similar ticks a number of boxes. It is set over a millenia later, with long-lived humans having to further respond to the every-expanding sun. There is an interesting political angle, with factions dealing with the recent arrival of aliens and their AIs in different ways, and some heading much further out of system.

Kath is long-lived, whilst her erstwhile colleague is in much-reduced (virtual and turned-off) circumstances. Choices have to be made, not always popular ones, and, as in the early story, sacrifices have to be considered.

p dolce being a handwritten note written by Brahms on his manuscripts, the exact meaning of which musicologists have been arguing for many years. A young musical student takes the opportunity to be sent back in time as an observer, to find out what this instruction meant. However, she finds that she is able to insert herself into the mind of Brahms’ lover, and returning to her own time is suddenly much less attractive. A second musicologist follows, to find her, and to bring her back.

When it appeared in Jonathan Strahan’s ‘The Best Science Fiction and Fantasy of the Year Volume 2’ I wrote:

A very dark, satirical look at what the world would make of Jesus Christ upon his somewhat belated return. Welcomed by some, shunned by others, claimed as the earthly presence of a visiting alien AI by others, a journalist tries to get to grips with the man behind the legend.

Cleverly-handled two-perspective piece in which an indiginous member of the female-dominated society, for whom ancestral memory is very much a given as memories are passed on directly from mother to daughter at birth, has to take the dramatic step of appealing to help from the very humans who 25 years ago were responsible for some terrible deeds.

A young medical officer, himself with a past, has to work out a way of dealing with the threat to the locals, as we find out that they are in fact a branch of humanity. Can he resolve their problems, and at what cost to them and to himself?

McDonald revisits his near future India, memorably covered in novels and short stories reviewed on Best SF, in describing a group of young Indian men who remote control armored military mechs. A young boy gets a chance to help out with the crew of cyberwarriors who seem so heroic and glamourous.

Dark satire in which politicians find that they are in reduced circumstances, very much diminished.

A young man rescues a strange furry animal from a research lab, only to find he has a sabre-tooth tiger cub on his hands. For the most part the story is light in tone, as he struggles to keep it fed, hidden and protecting others from it. The finale comes as somewhat of a shock as the now grown-up feline kills his erstwhile girlfriend.

Dellamonica’s earlier tale is a more traditional aliens-on-Earth action story. Zebrowski’s is an altogether more cerebral and philosophical (albeit with the threat of a tactical nuke in the background). Humanity is very much inclined to mistrust the advanced, aloof and patronising aliens, and we follow the conversation around a negotiation table as the aliens outline their history and its link to Earth, how they perceive their role with us, and the responses to that.

Gene Wolfe. The Hour of the Sheep.

Tiero is the unreliable Wolfean narrator, attempting to write his life story, under the shadow of his father. A master swordsman, he believes his lack of tales to tell of derring-do in the streets will affect his credibility, and attempts to find on the means streets action to remedy the lack. And he is able to step in to protect a young woman, take her to his rooms and being to pen the rest of his tale. Except..

The longest story in the volume, and a treat. It’s complex, with tales within tales within tales, although the nature of the relationships between those tales develops. A young man, recently widowed, finds himself increasingly affected by a persistent dream with a consistent setting and characters. The world he has imagined (or has he?) sees a planet with large bubbles of breathable air which move slowly around the surface, with cities moving slowly to keep within their compass. The Clanking City is one such, and there is politicking as the Prince spends his time dreaming the dreams of the other citizens. Back in his world, we find out more about the technical innovation the protagonist has led on, with quantum entangled humans and groups. Almost Wolfe-like, the dream world the ‘real world’ becoming increasingly linked. It’s a complex story, not included in any of the Year’s Best.

A ubik-linked fully-wired gonzo world, in which a young man’s dreamhouse is built in a co-operative fashion by wiki-groups. When things go wrong, the appropriate cause of action is to become the President and instigate a trade war with those with whom they are in dispute. The trade war gets nasty, but their winning hand is to turn off the South American’s sex toys.

An excellent collection of short SF. Several made it to the various Year’s Best collections, and a couple of others which were not selected would not have looked out of place. The volume starts well, is strong in the middle, and ramps up to a strong finish.