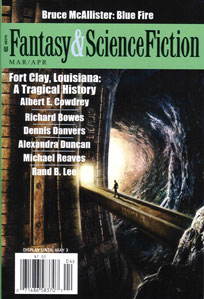 A young girl is living in remote, bucolic splendour, in a small cottage, with her mother and father. But something is not quite right – her father and mother do not meet, as one spends all night out of the cottage, and the other is out during the day. In fact is it a mythical relationship, as one parent is indeed Day and the other Night, and as myth has it (not one that I was familiar with), Day and Night did in fact fall in love in the ancient days, and had to be forced to forswear seeing each other, in order than Day could follow Night.

The girl, Ouriana, wanders from the cottage, and glimpses a family taking lunch under a tree in a field. There is something strange about them, but when the handsome young man chases her, and catches her, she is smitten. However, her world and the one in which he lives (clue in the title) are destined to cross only fleetingly.

Watery southern horrors in Cowdrey’s inimitable style. A young photographer is pleased to welcome elderly Dr. Corman to her house to see the book she has published, featuring photographs of a decaying, long-deserted 19th century military fort on the banks of the Mississippi. (Girl, check out his surname! It’s Corman. As in Roger Corman!)

It transpires, surprise surprise!, that the horrors which should have been consigned to history, are reaching out to the persent.

Or is Tim Sullivan identical twins, one of whom writes really good SF, and one of whom doesn’t?

The story starts of at breakneck speed, putting Wolverton, the ginger, lovestruck scientist with the overbite, into a very alien environment, with some very alien aliens (as in having heads in the stomach, which was the kind of thing you got centuries ago before it was realised that heads pretty much -have- to be atop the shoulders to be effective).

It’s a pell-mell, headlong adventure story, but maybe I was in a a po-faced mood when I read this story (and its predecessor). But I read this story at lunchtime over a fine half pint of real ale in a lovely Oxfordshire village pub on one of the nicest spring days of the year so far.

Wolverton finally ends up with one of the girls of his dreams, as, fortunately for him, although gratingly for me, the girl falls for his charms.

Classy horror story in which a successful horror story writer relates a true story from his childhood in the 50s. We follow his younger self and his couple of friends, off into the nearby desert, toy rifes and cap guns to hand. It’s convincingly, and lovingly, related with details that ring true. As it starts to approach dusk, and time to head home, the nearby cave, somewhere out of bounds to them due to a group of kids dying there a generation back, suddenly becomes a place of horror, as those predecessors are there to haunt them, and the chilling earlier generation slang and earlier generation pop guns, and radio star cowboy heroes to whom they pay homage, is another clever touch.

Richard Bowes. Waiting for the Phone to Ring.

Gentle Pratchettian fantasy funny featuring an elderly wizard with powers somewhat on the wane, and his familiar, an invisible chair.

An updating of the classic fairytale, with a princess held incommunicado under a repressive political regime. With regime change, there comes the chance to rebuild her life – but the talking frog, a present from her recently incarcerated father, is reluctant to accept the kiss to be returned to human form. Instead, the frog takes to the hustings, and achieves a high profile, and attention from the authorities. In the end, fleeing persecution, the kiss takes place, but there is a twist in the tale.

Dennis Danvers. The Fairy Princess.
A very modern Christmas Carol, in which a somewhat cynical divorcee finds a sort of Christmas yet to come.

Bruce McAllister. Blue Fire.
In a world where there is an army of blood drinkers, led by an infant born in Jersulasem on the same night as another infant, but whose mother died in childbirth and whose blood the infant how to draw life from instead of her milk, the ageing, dying pontiff is confronted on his deathbed by a child of the undead. The Pope has to struggle with this living/dead evidence of lack of God’s love, and the child’s resolute belief in being outside of god’s love is similarly challenged. McCallister portrays the inner struggle of the pontiff well, and it is quite categorically, the best short story about a vampiric attack on the Holy City that I have ever read.

Regular readers will doubtless have picked up that I’m not the biggest fan of xenolinguistic SF, so you can imagine the sinking feeling upon the editorial intro revealing the story ahead offering ’some of the most daring linguistic gymnastics ever attempted’ in the pages of F&SF. Yarblockos, sez I. But I was in a mellow mood, and gave the story as much chance as I could.

But, nope, it didn’t grab. There was stuff I would normally like. The narrative isn’t linear. It is quite clever in its structure. It even had some French in there, and the juxtaposition of English, French and alien was a nice one. But in fact the alien lingo wasn’t in itself a problem, although for my money it did get in the way of story – if you’re going to use alien words, let it flow like Burgess did in A Clockwork Orange, adding richness and texture, and leaving the reader wondering, rather than having lengthy unpronouncable words dotted with punctation and providing the translation.

But what tipped the balance was the terrible, terrible representation of human dialects. There was a Texan who was presented as virtually a Foghorn Leghorn caricature (‘Ah say, Ah Say’), and a New Zealand who was even more winceful. So I ended skimming through to the end, and missed the benefit of the non-linear narrative (I’m assuming there was one!). Also, somewhat confusingly, the main story was introduced through the device of a teacher relating a story about a historical character. So, shouldn’t there have been a concluding paragraph, from the teacher/narrator, to bookend the main narrative? Or maybe that was part of the clever structure?

Conclusion
Reaves and Bowes my favourites, giving the first half of the chunky, value for money, volume more grist to my reviewing mill.