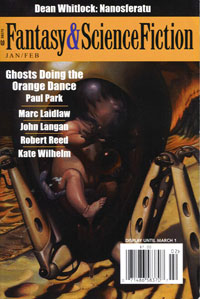 Short fantasy in a world where when the hunting season opens, the game that is being chased are goblins, faeries and all manner of fantastical creatures. Young Navin hates his family hunting trips, partly due to his big sister, who is a hunter par excellence, and partly due to his proclivity for being bitten by the various nasties out in the woods. And on this trip, he gets bitten by something parastic that brings about great changes

Charles Oberndorf. Writers of the Future.

An aspiring author gets a chance to study at the feet of a writer who he has long admired, only to find the reality does not live up to his expectations. He is smitten by a fellow workshop-attendee, but throughout is unable to get the words out, or carry out the actions that he plays through in his head. Years later they meet up again, and he remains every the dreamer. The far future setting has humanity in reduced circumstances, uploaded AIs taking over what was Earth orbit, and the fiction being created is interactive, with the reader engaging with the narrative and choosing story-branches – but with speculative fiction looking to the future being a long-lost milieu.

The story reads somewhat like one I’d expect to see from a new writer, produced for a workshop. There are several ideas in there, but it’s never clear what is the author’s focus or intention. The idea of young people sharing dorms and getting naked in front of each other comes across as almost a juvenile conceit, or one from times long past (Heinleinian), and there’s a lot of conversation.

It’s not up to his last story in F&SF link, and wonder if Oberndorf is being very, very clever in terms of writing in the style of a novice writer!

A complex, substantial novella from Park, of the type that F&SF has done well over the years. It’s a tale within a tale, a fiction within a fiction, part-family history.

The narrator relates his family history from both lines, going back several generations, utilising extracts from other publications, military tribunals, and novels written by his forebears. An unreliable narrator, we follow his imagined relationships, and those relationships that take place in the online world of Second Life, as all this is seen through the magnifying lens of his own life. In addition to the richly created backgrounds to his forebears and their history, there is the repeated occurrence of children born with cauls (of which he was one). And as he probes deeper, the repeated occurrence of strange visitations, and his family’s role in rebutted those who would seek to enter our world, is clarified.

To add further depth, the near-future USA has suffered, politically and environmentally. The story draws to a dramatic conclusion as the narrator finds himself inexorably, albeit unwittingly, eventually called to take up his place in the historic stand.

It’s a story that requires, and rewards. the reader’s close attention.

Five traditional fairy tales through the wry lens of modern (in)sensibilities, as is F&SF’s regular wont

Short, not very subtle blackly humorous take on nano-meds, as a very unpleasant CEO of a pharma company is delighted to hear that the Asian and German researchers (crude stereotypes) in his employ have created nanobots that knock Viagra into a cocked hat. His wife is less than pleased with his renewed vigour, but she, his mistress, and his driver and the housemaid, find a way of ensuring that this scientific breakthrough will benefit the world rather than the company balance sheet.

John Langan. City of the Dog.

A young man, struggling with his girlfriend’s infedility, finds things get much, much worse as the dark, undead canine horrors lurking underneath the streets of Albany close in. The well-handled relationships, and complex first person perspective gives a believable backdrop that helps improve the fairly routine horror setup.

Short piece in which a woman is facing a bleak future living in the parental home with an increasingly irascible and aggressive, wheelchair-bound father, and her submissive mother. Does the ghostly whistle of a late night train, with no railway nearby, offer her an opportunity to leave this behind her. But why did her mother never take such an opportunity?

Excellent issue, with Park’s being the standout story.