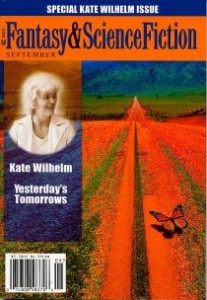 For three quarters of this story I was enthralled. We start with Hal Whitcombe, late 40s, history teacher, life going nowhere, driving back from visiting his daughter and grandchildren. He picks up a hitchiker – chance, or predestination? The enigmatic young woman is making her way slowly to California, planning to hitch, take buses, maybe drive. Both are in effect finding themselves. In driving slowly west, they gradually find each other, and themselves.

The young woman, Tilly, is a scientist, from a family with a pedigree in the sciences. And it is the death of her grandmother, married to, and widowed many years back, a scientist that is the crux of the story. Tilly has fallen foul of a millionaire celebrity scientist. But Hal spots some evidence that points to murky goings on – related to genome research.

As the story elegantly unfolds it slips into the crime fiction which Wilhelm also writes. And here I found a problem.

It is partly something to do with suspension of disbelief I suppose. I can willingly disengage credulity for space travel, time travel, galactic empires and so forth, but I have never been able to engage with crime fiction in that I would find my credulity being stretched by the co-incidence and the motivation of characters in much of crime fiction.

To me this story rather degenerates towards the end, with a denouement straight out of a B-movie. You could almost imagine Humphrey Bogart in there somewhere, as the evil scientist gleefully administers an amnesia potion to the heroine, tells her the entire plot, only to find that she hadn’t taken the potion and had in fact been taping his speech. (Shades of Scooby-Doo : ‘If it weren’t for those dang kids….’)

It rather spoilt the subtle undertones of the nature of the grandmother’s ‘vision’ of the future, the chaos theory, and the characters which you cared for. We leave them with Hal smuggling Tilly out of a hotel, past the media, with her in disguise. Doh.

The introduction helpfully tells me that this story is ‘about American history and what might have been’. Well, armed with that I’m not sure it helps me much. Obviously there weren’t mammoths in North America in the last couple of hundred of years, but was President Jefferson a believer in mammoths, or what?

The story was intriguing, but baffling!

Elegy for a Greenwiper. Alex Irvine.

A far distant planet has humanity living in sterile domes. A small Green faction is doing exactly what you would expect – trying to ‘green’ the environment by releasing nanoblooms. The hero, Krzysztof, is one of an elite team who track down and clean up the nanoblooms before they can begin to turn the planet into a living sphere (on the basis that Earth was such as sphere once, and was ruined, and therefore such a fall from grace must not be allowed to happen).

The Greenwiper, faced with this bio-terrorism, is forced to confront his beliefs.

Rather extreme take on the extreme sports angle, with in this case, Eastern Europe having to host Westerners who come equipped to shoot up the locals.

Basically tasteless and rather silly.

In contrast, a very understated, neat story, in which another killer attempts to gain further revenge on the wife who dared to find another. A planet in which mirrors can be the gateway to the dead offers an opportunity for him. But…

The introduction claims this to be one of the creepiest (horror stories) seen in 2001. Well, even accounting for the fact I don’t really read horror fiction, I can’t see how this claim can stand up. The story is a bit Stephen Kingy, in that the old man in the tumbledown shack has dark, dark secrets that go a long, long way back. But not a real blood chiller.

For me the Wilhelm story was a tad disappointing, and it is only the Robert Sheckley story which I will remember with any fondness.