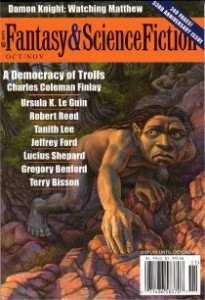 Not an obvious collective noun for the rock-dwelling sun-hating trolls in this story. Despite their base manners (eating rotten meat as a preference) and limited intelligence, democracy by means of voting is a key means of decision making within tribes.

A mother whose recently born child has died replaces him with a babe in arms from a dead couple – a dead human couple. And as with Tarzan of the Apes, this youngster has to use his cunning and guile to make up for his lesser strength. It is he who is the future, as the number of tribes continues to fall.

The story was a bit of a disappointment as it didn’t really go anywhere that hasn’t been done before.

Jeffrey Ford. Something by the Sea.

A phantasmogorical tale of a young girl entranced by her elder uncle, and on a warm night under the stars a flight of fancy takes them both, and the hound Mathematics, on a sea journey to a far, far away world.

A short piece in which a car alarm AI gets the better of the owner.

A non-genre story, which is a change from Reed’s usual mind-boggling far future tales.

A man whose wife dies on the site of the house they are building is grief-stricken, and slips into a madness in which he is driven to create a landscape that is a tribute to her. Or more in fact.

Again, fairly mainstream. There is a touch of the Graham Greene’s in this story of a central American war ‘hero’, who is caught in the treadmill of his celebrity. And a little of his ‘R&R’ in the slightly detached aspect of the main character.

An American journalist discovers proof of the horrors that the current generalissimo has been involved in, and it is time for the hero to stand up and be counted. His belief in his immunity from the violent general is misplaced, and he is vicously beaten. Help is at hand, however.

That help is from a curious source (this is the fantastical element), and he is able to escape his treadmill.

A ‘think-piece’ ie not a story, but more an essay outlining the particular issues involving a race who share their dreams when they sleep. I’d rather have seen it worked into a story.

Tanith Lee. In the City of Dead of Night.

A deserted city on the top of a steep plateau, and the riches therein, is the destination of the two protagonists. Fortunately for me (one who does not really like straightforward fantasy) this is not cod-fantasy. There is an almost Analog element within, as the two have to work out how out outwit the dark beast which has them cornered in the city, but they escape with their lives, none the richer, although wiser.

We see several short episodes in the life of Matthew, through the eyes of his twin brother, who died/was murdered at birth.

The story in given added piquancy by the recent death of Knight as the underlying issue in the story, of fathers and sons failing to get to know each other, is a sensitive one.

The quality of the writing is outstanding in several cases, although for me this slightly hides the fact that the content is relatively less strong.