Fantasy and Science Fiction May 2002 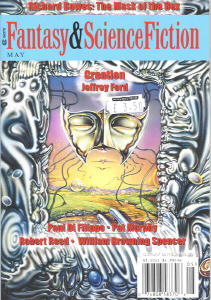 The bookish Dottle finds his path from quiet middle age to the end of his life takes a rather strange, and shorter, turn when he meets an attractive young woman. His naivety prevents him from seeing that she is a gold-digger, and unfortunately for him, she is an impatient gold-digger, and hastens his end with a gardening axe.

The tree against which he has been so rudely despatched takes up his soul upon his death, and Dottle rather comes to like his quieter, albeit less mobile existence. But his widow has further plans, and his garden has real estate opportunities, and so the tree must go. Dottle’s immortal soul remains with the tree and as it is reduced to smaller pieces of lumber, he finally ends up in an offcut which is turned into a pipe.

This final quasi-vicarious journey is paralleled by a more fundamental journey for humanity. Brian’s partner, Kris, has been ‘linked’ to the global information network, and he is worried about losing her to the information and people flowing into her head. A most chilling scene takes place when she is gardening, and is verbally ticking off the latin names of the plants in the garden. When she sees Brian she murmurs ‘homo sapiens’.

When at Chichen Itza the full extent of the new post-human potential of the linked becomes clear, and Brian has to reluctantly give up both his grandfather and his partner to the future.

An excellent take on a topic that has been handled less well more often than not.

Ford paints a child’s view on life, as the young protagonist becomes convinced that whilst in the nearby woods he has breathed life into a creature of branches, leaves and moss. The childish belief that this may have been so is lovingly created.

A wry take on vanity publishing, with the ‘victims’ of a publishing deal/scam gaining their revenge.

A post-human/AI conversation in which the interplay between the two intelligences is revealing.

Richard Bowes. The Mask of the Rex.

Linked, we are told, to ‘The Ferryman’s Wife’ from May 2001, although twelve months and about 100 short stories has got in the way of me recognizing characters from this story from the earlier one!

I did review the previous story as being ‘an interesting start to a series’ and this very much continues in that vein. We are taken back to the 1950’s, with some flashbacks taking us further back, to a wealthy family in Maine. Through the generations there has been an important link with a cottage in a remote part of their estate, which houses a gateway to a dozen times/places, and which is guarded by the ‘Rex’, or a series of ‘Rex’.

William Browning Spencer. The Essayist in the Wilderness.

A charming, and spooky story. A bookish couple are living in the countryside, courtesy of a lottery win, and devote their lives to reading and writing. Audrey begins to act somewhat strangely, and her writing takes a most peculiar turn, after being bitten by a bug (and not the writing bug). Jonathan decides upon a career as a essayist, one to be inspired by nature. Upon a foray into the nearby wood he spots some very strange creatures, which a hurried phone call to a friend gives him the (fatally incorrect) impression that he is watching crayfish. He is so naive (and stupid) that as their behaviour becomes increasingly more strange he does not realise that the creatures are far less mundane than he was advised.

In a Stephen King-ish conclusion, Jonathan finds the buried body of the insect exterminator he had around the house earlier, and flees to his house, trying to engross himself in a book as a means of ignoring the strange noises which are coming ever closer…