Fantasy and Science Fiction May 2001 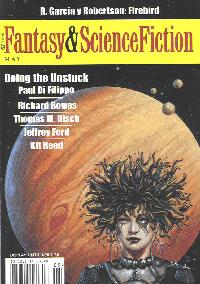 The angst of teen Goth Erin is painfully observed, and set to the music of The Cure (I was more of a Siouxsie and the Banshees person myself). Erin has the attitude and the fashion sense, but lacks the crowning glory – the tousled hair a la Robert Smith. Her neat bob is a requirement of her mother, using the recently deceased father to keep her daughter’s hair in check.

But Erin is finally able to get her hair done – and it looks absolutely out of this world.

The Jovian sea-dweller who enables this transformation finds his plan for domination of the Earth is not as easy as planned, particularly as his host is a determined young madam.

A troublesome toddler is driving his mother to distraction. Why can’t he be just like the clean cut, polite, well-behaved boy from, well from one of the houses nearby?

I have to admit to a frisson of apprehension when the intro to this story mentioned it being part of a new series of stories concerning ‘Time Rangers’, mysterious people who patrol the streams of time. Shades of Kage Baker’s ‘Company’ series!

Suburban 1950s is the setting for two of the said Time Rangers, who play host to an attractive young woman who is on her way ‘upstream’ in an alluded-to far future conflict. The husband is particularly welcoming.

An interesting start to a series, suggesting a bit more depth than the rather, to my mind, flat ‘Company’ stories of Kage Baker who largely uses the time travel Company as a conceit to do a wide range of historical stories.

Shorter story, bit of a throwback in its human on an alien planet having to resolve a mystery plotline. The local inhabitants appear not to recognise the concept of either time or death. For the human both prove to be most definitely present.

A Trick Worth Two of That. Robert Sheckley.

Nicely understated and well-written homage to Bram Stoker’s Dracula, with a contemporary car journey through the Carpathians providing shadows of suggestions of echoes of times past.

The not-unheard-of plot device of a Compostion course teacher and their students furnishes a story I which the rhymes of fiction and life intertwine to provide a chilling denouement.

A sort of medieval, mineral based Rollerball.

A follow up to the August 2000 ‘The Iron Wood’ (which I haven’t read), set in the ‘fantastic medieval world of Markovy’.

Young Katya was thrown away when a girl-child, taken in by a witch. Her skills and cunning are necessary to save herself, and the dashing knight who rides into the wood, injured and pursued.

Sufficiently inventive, well-written and lacking cod-fantasy-tropes to be a worthy read.

A good issue, though not a classic.