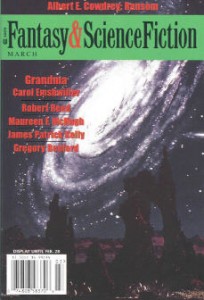 A strange near future USA in which the dominant religion includes putting young children into houses inside pyramids, thus entombed to await enlightenment. Another unsettling story, rather spoilt IMHO by a fairly routine religion related cartoon on the last page of the story!

In a recent On Spec we saw Superman as being adopted by a Canadian Jewish family. Here the super/wonder woman is in her dotage, her superhero days long gone.

Cowdrey returns, once again at length, to the world of ‘Mosh’ and ‘Crux’, two stories which I struggled to enjoy, and did not finish.

Here we meet up once again with again empress Xian Xi-qing, Hastings Maks, General Yamashita and Colonel Yost, with the kidnapping of a young child the fulcrum upon which events revolve (or teeter, to be more scientifically robust).

The extreme length of this novelette allied to the previous two stories in the sequence add up to a major investment of reading time, and, gentle reader, I decided not to invest said time!

Alzheimer’s Disease has been featured in a number of stories of late. The editor suggests that this story is sufficiently different to others, but I’m not convinced. A wife reluctantly invests in leading edge medical intervention to rebuild her husband’s brain, in the knowledge that whilst he may return to functionality, he will in effect be another person.

The story ends at the interesting bit – the treatment is appearing to work. How will the couple build a new relationship?

The last was an outstanding issue, making this a *bit* of a come-down. The length of the Cowdrey story is for me a problem, as I would much rather have had more of the Robert Reed and the James Patrick Kelly stories which are well crafted and frustratingly enigmatic!