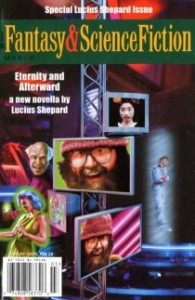 A lengthy feature novella as part of a special Lucius Shepard issue. Katherine Dunn provides an introductory biography and the story is followed by a bibliography.

Eternity is a dense, powerful story set in near-contempory Moscow. Viktor Chemayev enters the eponymous nightclub, within grasp of his chance to flee the city and the country, with his lover, a hostess in the club.

To do so, Chemayev has to meet the owner of the club, Yuri Lebedev, who is rumoured to be far more than the man he once was. Chemayev’s night in the club is a pyrotechnic, disturbing voyage which threatens his very soul, a jungle quiet different from those South American jungles in which Shepard has previously probed the deep, dark recesses of the soul. But one that is at the same time quite similar.

Pity the author who has to follow Shepard’s novella. Not.

Reeling from the Shepard tour de force, the reader staggers out of the Eternity night club very much like Chemayev, grateful to be free and safe. Only to be run over by Robert Reed in an equally powerful, if much shorter, literary pantechnicon.

Reed takes the genmod and cloning possibilities and provides an unfortunately all too believable story. To go into the plot would be to give too much away, but suffice to say that the story looks at intensive farming in the near future. Scarily, the story was published as the Foot and Mouth epidemic began to devastate the UK, caused in part by animals being trucked from one end of the country.

Slipshod, at the Edge of the Universe. Robert Thurston.

A being made of pure energy observes the human exchanges as a crew explore the very edge of the universe, and beyond.

In any other issue, this two-pager could usefully fill in a bit of spare space. Coming after the first two stories in this issue, it looks even triter than it is, if that is possible.

Warts and All. Esther M. Friesner.

A re-telling of the Princess who kissed a frog and turned him into a Prince fairy tale. But with differences. Entertaining stuff.

A final word about art. I tend to categorise ‘SF Art’ alongside ‘SF poetry’ as being either oxymoronic, inappropriate bedfellows, or just plain b-a-d. This month’s cover was referred to in the last issue of F&SF as being ‘lovely’. I’m presuming that the cover shipped with issue is the same cover (unless something happened with the ‘lovely’ cover and they had to get a replacement done, and quick!). So we get a cover with a hugely unflattering picture of Lucius Shepard (which is used twice!) which makes him look like an intellectually challenged hobo. Worse still, the back cover offers reprints of two ‘special F&SF covers’ – obviously the adjective ‘special’ is being used in its less common usage as a synonym for ‘crap’. I don’t want to be reading F&SF on the train and have people look at a cover like the illustration for ‘The Auschwitz Circus’ from June 1996 and think that I am reading stories on a literary par with that illustration!

And a final, final word about the cartoons. Don’t.