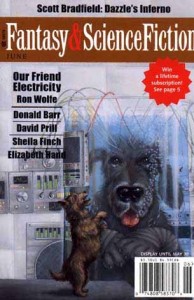 How do you start an issue which follows on from the outstanding June 2002 issue? With a story as strong as this one, stupid!

Wolfe’s depiction of a doomed love affair played out on Coney Island is reminiscent of Bradbury’s ‘Something Wicked’ in its portrayal of a carnivalesque strangeness and simmering undertones of dark and of menace. You find yourself transported to the ‘fun’ fair, where Brad falls for the mysterious Toni, who leads him on a rollercoaster emotional journey with the secrets of the past and of the yet to be only a heartbeat away behind the din and the bustle of Coney. Excellent.

Dating girls can be difficult at the best of times. When you are both dead and your body is beginning to fall to pieces with perverse timing, what is a guy to do?

Jerry hasn’t had a date in ages, but when he plucks up courage to ask a girl for a date, he falls to pieces. Literally. And squishily. Ewwww.

A wheelchair sportsman is King of the Hill due to his racing prowess. He is focussed/self-centred and his determination has brought him dividends. But what if a new surgical procedure can help him walk again? Will that gain be offset by losing his identity as a star athlete?

A gently humorous melange of HG Wells ‘The Time Traveller’ and Mary Shelley’s ‘Frankenstein’ with just a nod in the direction of Mel Brook’s ‘Young Frankenstein’. The rent-a-mob peasants, for whom storming the castle after a few pints is the usual Saturday night routine, are particularly entertaining.

If the depressing run of SFnal deaths of late have left you a little maudlin, this will cheer you up no end.

The ageing and creaking protagonist makes a choice – a cotton-wool-padded dotage of an increasingly virtual nature, or one final holiday with the sun on his face, the wind in his hair, and a glorious, if terminal, embracing of what it is to be truly human?

Not a shaggy dog story, but a smart-alec dog story. Dazzle is a canine whose mental faculties and command of language are somewhat more advanced than most of his contemporaries (for reasons not explained – perhaps this was covered in the previous story which featured Dazzle?)

He ends up in a dog pound, counting down to being put down, having to avoid becoming a bitch to the bull dogs in the pound. He escapes the frying pan, only to fnd himself in the fire, as he has the privilege of being wired up by scientists who wish to talk to the animals, a la Dr Doolittle (only relying on hi-tech and cranial/brainial inserts).

They get more than they bargained for, as Dazzle uses his new-found voice to unburden canine woes.

The moral of the story is one, though, which is thoroughly applicable to humanity as well : “in life we lose little pieces of ourselves, and enduring those losses is what life is all about. Not paving ourselves over with cosmetic surgery, or spackle, or bad faith. But wearing our brokenness openly in our hearts, and in our faces”. Well said, that dog.

An intriguing metaphysical tale concerning an employee who, once his employment is terminated, begins to lose his place in the scheme of things.

Sadly, I cannot tell you much more, as in both the Palm Reader and the Adobe PDF versions of this issue downloaded from Fictionwise, the story suddenly stops in mid-