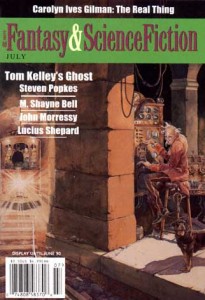 Somewhat belated review, as I never did get a copy of the printed edition, but as F&SF is now on PeanutPress, I was able to download and review the electronic version.

A young couple move into a house, which at the turn of the century was a brothel built and run by the eponymous Kelley.

Rather than visit Stephen King/Frank Herbert type unpleasantness upon the couple, trying and failing to have a baby, the husband enters into a conversation with the spirit of Kelley. Fascinated by the history of the house, he researchers the story of Tom Kelley, and in relating the full story, frees both the ghost and himself from burdren.

The tale of Kelly is that of a pact made, and a long, journey of pain and redemption which is needed to put things right. The final scenes deep, deep in the bowels of the underground system are truly spine-chilling, and a fine counterpoint to the earlier character-driver elements of the story.

Stan is about to kiss Sheila for the first time, but is rather nonplussed, as most would be, when she bursts open and fills the air with yellow gumballs.

The opening paragraph pretty much sets the scene for some very peculiar goings-on, in which computer games, dot com startups, Dungeons and Dragons and all manner of late 20th-century ‘stuff’ is brought together extremely well – certainly not giving away any hint of it being a first sale. The only concern for me would be just how close this story is to a bad trip or a nightmare experienced by the author? It could be worryingly close to reality :-)

Another humorous story, quite short and rather suffering from being a one-joke story. “Hey, what if after they ran away together, the dish and the spoon had to see a marital therapist?”

Near future Earth, in which the politics have become more extreme and civil liberties are under threat, and the societal consequences explored. A high-tech stock dealer is, as are many, wanting to get off Earth, away from the increasingly draconian regulatory atmosphere. And like some, he discovers he has more need to get off world than he originally thought.

The intro cites Fredric Brown and William Tenn as inspirations for this short, humorous story. As with the Morressy story above, a fairly simple proposition – and as in much classic SF, the main character attempts to get around the simple proposition. But you can’t beat the system.

Information Technology has been a mainstay of SF for many years, but with the focus on the T of IT. In recent years the focus has shifted to the I in IT (Nancy Kress’s ‘Steamship Soldier on the Information Front’, Charles Stross’s recent stories).

Sage Akwesasne steps forward to be the first time traveller. One drawback to the system of time travel is that it is one way – she will be encoded as pure information, then squirted digitally via a black hole into the future, where she will be reassembled.

Successfuly transcribed in the future, she awakens to instant global celebrity, and to copyright ownership issues! The Metameme corporation, headed by billionaire mega-geek D. B. Beddoes, has her in his portfolio, and Gilman explores issues around the commodification of knowledge, and information needs and information wants, at length. The love interest is a little creaky, it has to be said.

A pretty fine collection of stories. The shorter tales are slight ones, but well written for that. The longer stories give plenty of value for money.