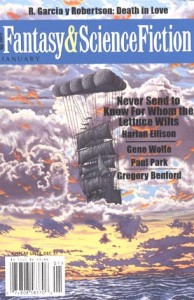 Almost two year’s after its publication, a mini-review in order to fill in the only post-1999 F&SF issue not previously reviewed.

Harlan Ellison. Never Send to Know for Whom the Lettuce Wilts.

An expanded, reworked 1956 story. Henry Leclair finds a very obtuse statement in a fortune cookie, and is the kind of chap who can not rest until he finds out the meaning. His detective work brings him to the factory where the fortune cookies are made, and he finds that the cookies are just one element in a centuries-old alien plot. (Wilting lettuce being another of their cunning plots).

One of Wolfe’s tantalising, teasing stories, giving us a short story which is but a glimpse of a much bigger story. In a small, enclosed small community, living in a future in which our science has gone/been taken away from humanity, but with others who still have access to that science, watching. Bin befriends a young frail boy, and falls foul of the ways which threaten being burned at the stake.

Set in the same setting as two of his novels, a young boy dreams of working in the Tower of Astronomy. He achieves his aim, and is bemused by the son of the Grand Astronomer, who does not wish to follow in his father’s footsteps. They each, in their own way, attain their dreams.

A senior out golfing has a severe cardiac episode, and he undertakes a dream/nightmare journey into his past, given an opportunity to revist and resolve that which has happened.

In a suburban basement, a darkness from native American lore is growing, and calling for Eli. Has he travelled too far from his roots to be able to help?

Robertson spins a sumptous tale, in his Markovy series (‘Firebird’ F&SF May 2001 ‘Sufficiently inventive, well-written and lacking cod-fantasy-tropes to be a worthy read’). In this tale Lady Death and Eros have to defend against piratical invaders. Due to reading this issue late, I read and can recommend the couple’s re-appearance in ‘Killer of Children’ (F&SF Dec 2003).