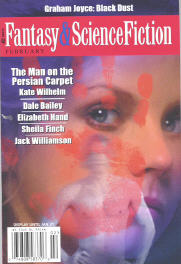 The Man on the Persian Carpet. Kate Wilhem.

A potent blend of mystery/suspense, time travel and a sacrifice needed to keep the world in balance.

The writing oozes class, as one would expect.

A small community on a remote star find their way of life, a simple life based on faith, is disrupted by a visitor from another planet. His spaceship crash lands and his ruined body is laid to rest in a room in the village. When, in the next morning, his body has repaired itself, the message he has to give the community shatters it. Returning some time later as a saviour, his godhead persuased village members to shun their back on their ways and to give their immortal souls to him.

One he is unmasked as a criminal, the pastor’s son has a choice to make, which sees him leaving his family and life far behind him in terms of space and time – a form of afterlife.

I have to own up to having a bit of an ‘issue’ with the author’s ‘Silurian Tales’ sequence. The issue for me is that the stories for the most part are fairly straightforward short snapshots which the author could presumably keep on writing till the cows come home.

The standard of story-telling actually rises with this short and wrenching tale. Not remotely F or SF or speculative, but I’ll let that pass.

Set in an English mining town, two boys find a cave in a place where they regularly play and where there has never been a cave before. The story unfolds, revealing the father of one of the children as being a man who uses his fists on his wife and his boy, his ‘lovely boy’. But paradoxically (this is no simple stereotyped violent man) he loves his child and can see his use of his fists as not a be-all and end-all. In a confrontation with the other boy’s father, he cannot see why buying the boys presents has anything to do with his abusive behavior – “One thing does not touch another”, he says in a powerful confrontation.

An accident in the mines sees both boys fathers in peril – one to be rescued, and one to be the rescuer. And in a heartfelt closing scene, the abusive miner’s love for his son shines through the gloom.

Interactive theatre in which the actors respond to input from the audience and improvise a variety of potential endings is the norm. But the next stage is for more direct neural input by the audience. The forkpoints are mirrored in the life of one of the actresses who has to make a choice about her future in the theatre, and her need to look after her disabled child.

Victims of violent death rise from their graves to support the Presidential candidate who is opposing the gun lobby. (Not so much the grey vote as the icky-bits-dropping-off vote).