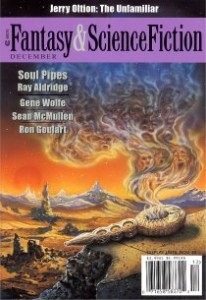 In mainland Spain a young girl is found in the countryside – evidently feral and most definitely cranially deformed. But what is the true story behind her, and how did she come to be found in largely rural countryside?

A young linguist is brought in to communicate with the frightened girl. He manages to gather her trust over several nights, and establishes a rapport and begins to communicate with her. And then the simplest, if least plausible, answer is found – she is a hominid.

With shades of King Kong, the young girl is about to be publicly put on show, but the young scientists flees with her. The linguist, and the reader, is shocked when the girl, under threat, simply disappears.

It transpires that she is part of a hominid tribe with the ability to walk forward in time – and the linguist has a choice to make.

The twist at the end of the story is somewhat sudden, and rather misses the chance to explore the budding relationship in more detail.

A SF/horror story – with a somewhat filmic feel to it. A scientific mission on Graylin IV is trying to find out what happened to colonists, whose presence has been virtually wiped clean from the planet.

The creeping horrors appear – nocturnal nightmares summoned, it would seem, from the dark recesses of the scientists. One by one the crew succumb to the madness, and are killed in a variety of cruel ways. Only one scientist, his own imagination scrubbed prior to the mission, is evidently immune.

The colonists were Jamaican refugees – and it is the ganja that has gone several steps beyond the paranoia that smoking pot often causes (or so I am reliably informed) which is the root of their nightmarish downfall.

Macabre in places, and the story is actually of a lower level than the high standard of story-telling and the backstory.

Wolfe’s stories generally give pause for thought, although in this case my thought was: ‘Was this really written by Gene Wolfe?’

A knight from ye court of King Arthur is travelling far, in search of a fabled glass hill. He duly finds it, and also the damsel most fair entrapped in the castle atop said hill.

By cunning, and use of labourers, the Princess is rescued and ergo the knight eligible for her fair hand.

It then transpires that ye evil wizarde who placed the Princess in her predicament is in fact from the far future, and his Cunning Plan is to rewrite the course of (his) history by leaving A Fearsome Weapon in (his) past.

The knight takes the weapon, but disposes of it in a river at the first opportunity.

And that’s pretty much it folks – which isn’t something you would generally find yourself saying about a Gene Wolfe story.

A young man inherits an elderly relative’s house, but finds that it comes with what at first appears to be a lap-dog. It transpires that it is in fact the ‘familiar’ of his departed relative, who was a (fairly domesticated and suburban) witch.

Ron Goulart. The Woman in the Mist.

A further story about one Harry Challenge, a Victorian ghost-buster. Some of Goulart’s humourous stories I like, some I don’t. This felt a little forced to me, and came into the latter category.

A so-so issue. Nothing outstanding, and a bit of a step down from last month’s issue.