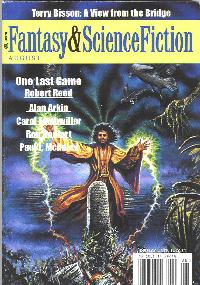 Another story from Reed, who has taken over the baton from Robert Silverberg as probably the most prolific quality writer of short SF. But imagine how much more SF he could have written if he hadn’t wasted so much time on the unnecessary novelisation of the excellent novella Marrow!

And, as we have come to expect, another piece of excellent writing. Teenager Neil, angst-ridden and with such uncool parents, reluctantly travels on what promised to be yet another painful family holiday. But this is going to be very different, and echoes from the future will have a big, although unseen to Neil at this time, impact on the present.

A sort of Alternate History, although of the kind that is so close to reality (none of this silliness about What if Germany won WWII). Indeed, without a detailed knowledge of the life of Philip K. Dick, this could almost be read a fictional descriptIon of an actual meeting. Of course, being AH there has to be the odd reference to events which didn’t happen – such as the aside about the death of the young Bob Dylan.

BTW the other Dick is Richard Nixon. To my mind this story fails even more so than most AH because the nature of PKD’s take on reality was far more complex and fascinating – this story comes across as being just a little too obvious, for my liking.

I was surprised to read in the introduction to this story that Arkin is a fiction writer – for me I would associate him with Catch-22 and wasn’t he given a rather difficult job of being Inspector Clouseau in one non-Sellers film?

A further surprise is the story itself, in which a debunker of magicians/charlatans comes face to face with someone on a plane flight who will test him and his faith!

A most unusual ‘story’ – a series of 27 footnotes from what would by deduction be a scientific article reviewing an ecological disaster in the near future. Clevery done.

More quirky Goulart humour. A few larger than life magical characters, the juxtaposition of magic and mundane suburbanity being one of the neater touches. Fluffy stuff, and passes half and hour quite amiably.

A most enjoyable, difficult to categorise and describe story (always a good sign). The labours of men and women, and the different natures of those labours, are portrayed in a most unusual mountain community, giving a sly insight into gender differences.

A View from the Bridge. Terry Bisson.

An interesting short. Cynically, you could take the view that the original version of this, published in a webzine, was done in the form of a transcript of an interview on account of that being a fairly easy, albeit crude, method for getting across a story. It really is a one-trick act, with a little bit of descriptive color, but Bisson can do much, much better.

A big dose of the eldritch horrors to close the issue. Sticking clearly to the standard narrative techniques (tales being told in front of a fire, someone with an old, deep secret), but nevertheless this tale of a remote Hebridean island, and scientists tampering with something that clearly should not be tampered with, is well done and satisfying.

A good issue, though not up to some of the recent issues. Not much by way of a standout story, although the Emshwiller story sticks in the mind most.

An interesting cover, presumably from a doppelganger Earth on the far side of the sun, where our rules of composition, perspective and style are strangely reversed. A bit of a shame really, as recent F&SF covers have been quite good as a rule.