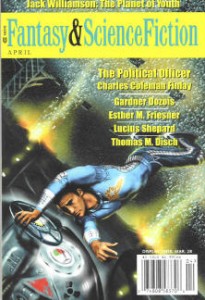 Out on the range there is a secret. The illegitimate offspring of a most un-natural liaison (it does get awful lonesome for those cowpokes out their minding the herd – hang on a second, cowpokes?!). Whilst the son is a charming cow-boy, the 50% of him which is human is 100% charming, the bestial secret of his origin has been kept for some years.

But when the owner of the ranch dies and a city-type visits with the sickly child who will inherit all, the future for the cow-boy and those working the ranch is in jeopardy.

Fortunately, the cow-boy charms the pants off the City Woman. And how!

A throw back in tone to the Golden Age. An all-male (with one exception) crew is heading out in a military ship on a risky reconaissance mission against the alien threat to humanity. However, humanity is doing a fine job of threatening itself, and a Maoist-type regime is in place. On board the ship the loyalties of the crew are tried and tested. Is the Political Officer alone, or can he find help from someone?

Three Bible stories given a contemporary re-telling. As you may have read elsewhere on this site, I am not a great fan of straight fantasy, and am only vaguely aware of that most original of the ‘fat fantasy books’ through cinematic treatments, so I may have missed some of the subtler ironies in these stories! In terms of the broader ironies and humour they are fairly straightforward.

There is a dark secret in the woods. The beast within the hearts of men has become a true beast, and against a farming community with but one musket amongst them, and a poor one at that, the menfolk have to find inner strength to confront their inner demons and the demon which stalks them.

An altogether lighter tone, with a copywriter given a once-in-a-lifetime opportunity. But what about the moral dilemma in taking a commission from aliens bent on the takeover of Earth. Heck – she works in advertising, there’s no dilemma there!

Jack Williamson. The Planet of Youth.

The quest for immortality. A multimillionaire is tempted to visit a planet which would appear to offer life eternal. He finds that this holiest of grails is in fact attainable, but is that chalice a chalice with malice? Can he truly live happily ever after? Or is there a price to paid?

A not particularly startling take on an old conceit, but well presented.

A gentle piss-take (to coin a British vernacular) on the conceit of strange, unexplained alien artefacts. Not quite an artefact though, but a decisive pitch in an important game of rounders (US: World Series baseball).

The pitch stops halfway, frozen in time and space. The consternation on the diamond spreads to the bleachers, the city, and the world! The scientists, media, cultists and others all behave by the numbers. The home plate umpire remains intrigued, and after some decades it is he who is the only witness to the pitch being delivered, and he is able to decide : ‘steee-rike!’

An enjoyable collection, with Friesner, Disch, Bowman and Dozois providing some entertaining if not substantial fare. Williamson and Thomas provide some good fiction, the Finlay story is stretched just a bit too far to have really held my attention, but the Friesner is a little gem.