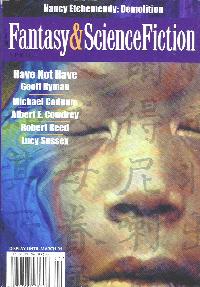 Have Not Have. Geoff Ryman.

Classy stuff. The societal impact of technology is something that Ryman has written on before (‘Everywhere’ from Interzone and Dozois 17th being set in the NE of England). This story takes us to a remote Chinese village, providing an exquisite look at traditional lives of people who by todays/tomorrows standards are ‘have nots’.

Slightly hackneyed set up – a journalist visiting an old TV star. In this case it is a SF channel ex-personality who sheds some light on some of the behind the scenes ‘secrets’ of his programme.

Short, and very creepy horror story. A young girl is kidnapped in order to retrieve a recently departed lesbian partner from the after-life….

Very short (5 page) vignette. A census taker appears to be entering difficult territory (as per the Hannibal Lecter census taker). But…

Evidently a pastiche on one of the lesser-known Brothers Grimm tales (The Griffin). A gender flip-flop (young girl undertaking challenges to win the hand of the Prince) provides some opportunity for humour. Although not a lot.

A property developer reaps what he sown, as per the popular horror theme. A curse from those he has had dispossessed leaves him in an increasingly nightmare situation as his own home and life is gradually taken from him.

The prolific Reed provides one of his more run-of-the-mill tales, in which a couple of antique hunters find a most peculiar recipe book.

The banks of the Nile produce a most peculiar child, adopted by Nefertiti, destined to become Pharoah, at once ruler of his country and yet a yearning star gazer.

Rodents prove to be a problem in a garden. But their nuisance to the home owners is naught compared to that the rat-trap is to the other denizens of the garden. And revenge is on the cards.

Initially the story starts as a simple historical-figure-being-studied-by-time-travellers-from-the-future, with the young Heisenberg being the person in question. But instead of being a twist on the what-if-you-killed-your-grandfather trope, the story gathers pace through a series of other sim-scenarios in which the scientists role in Nazi Germany is explored. Very good indeed.

A pretty good collection, the bookends (Ryman and Sussex) being the pick of the bunch. As with many F&SF a collection of 10 stories gives a wide range from which to find something that takes your fancy, but for me just a slight imbalance in terms of too many shorter stories. And a damn good cover! (Shame that the issue had no punctuation!)