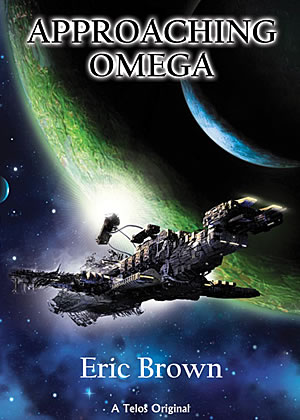 Eric Brown has been writing for more than a decade, a (very) regular contributor to Interzone, and a virtually ever-present in all nine issues of Spectrum SF in the early 00’s.

I certainly had felt that, how shall I put it?, that Brown was somewhat over-exposed at this point, with his Kethani/Tartarus story sequences going slightly over the same ground for my money. In contrast, some of his standalone stories, such as ‘Instructions for Surviving the Destruction of Star-Probe X-11-57’ (Spectrum #6, July 2001) were of a very high standard.

This story is interesting in that it was in David Pringle’s inventory of stories when he passed publishing of Interzone over to Andy Cox at TTA, but the story was rejected by Cox, and has subsequently appeared as this chapbook from Telos Publishing.

‘Approaching Omega’ is fine as far as it goes, although the story doesn’t really make the most of the opportunity which the author gave himself. Last year Stephen Baxter’s ‘Mayflower II’ chapbook from PS Publishing started with the same conceit – a number of humans fleeing (in his case in a generation starship as opposed to Brown’s suspended animation ship) to preserve the species.

The story is set up with (almost indecent) haste, as one of the maintenance crew of the ‘Dauntless’ gets on board, goes into suspended animation, and then is woken up earlier than planned due the ship having sustained massive damage en route. A lot of the sleeping berths have been destroyed, perhaps by the ship hitting a meteor storm, or perhaps by mechanical failure, as had been raised as a potential before they set out.

The aforementioned ‘Instructions for Surviving..’ could pretty much fit into this early part of this story.

With little they can do, the small maintenance team head back into suspended animation, only to be woken again ahead of schedule.

We then get into a very fast-paced drama, which reads almost like a film novelisation*, (duct-crawling etc a la ‘Alien’) in which the maintenance crew find out that the robots and AI of the ship have, quite horrifically, pillaged a lot of the sleeping colonists to develop cyborgisation, as an evolutionary step. It’s revolutionary, rather than evolutionary, and as the emphasis is primarily on the action, with the cyborgs two-dimensional baddies to be destroyed, there isn’t any subtle discussion of humanity’s need to embrace technology, but simply the drama of how the few maintenance crew members will fare against their enemy.

There is some interplay between these characters, but the major opportunity for a lengthy exploration of issues, when one of the crew members meets his cyborgised wife, is cut short.

(Unenhanced) Humanity prevails in the end, with the colonists able to find an Earth-like ship due to the skills of the one member of the maintenance crew who had been partially cyborgised – again, this cyborgisation being treated as a helpful means to the success of the mission, rather than exploring how a partial cyborgisation will impact on the essentially humanity of the person in question (‘hey, I’m normal, but I’m great at math’ being what happens in this case). The ending is a cheesy one, with good old fashioned humans setting up a colony – as with Allen Steele’s ‘Coyote’ sequence, a fairly uninspiring future for humanity – especially when the likes of Stross and Baxter have been exploring both the near and far-future development of our species.

There are some good quotes on the back cover, but I’m not sure I would go as far as Vector in calling it ‘a novella of power and humanity’. Stephen Baxter states ‘Brown is at the height of his powers’ which could be damning with faint praise (!), but to my mind this isn’t Brown’s best work, and is more of an Analog type of story than the more literary type of story you get in Asimov’s.

* subsequent to this review, on 28 May, in an article on The Alien Online, Brown revealed that the story had been initially written as a treatment for a film-script.