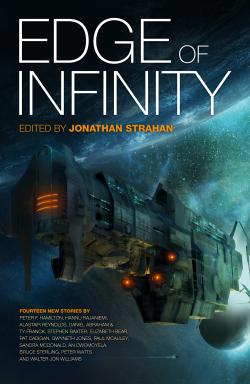 Having gone back and cut and pasted the previously reviewed stories, it gave me pause for thought as to just how good so many of the stories were. Really good. There stories sent in a humanity constrained to the solar system, but the stories are (perhaps because of that) almost all really good stories about humans, their desires, wishes and challenges. Buy the book!

Pat Cadigan. The Girl-Thing Who Went Out for Sushi.

Cadigan gets Strahan’s latest anthology off to a fine start. The volume is hot off the press so follow the link at the bottom of this review to buy a copy yourself to read if you want to avoid any spoilers!

The theme of the collection is humanity as yet till constrained to the solar system, and Cadigan looks at some of the tensions inherent in that through a JovOp crew, asteroid mining and generally tidying up out from Earth. There’s an inner/outer debate, with those further out in the system having taken some major evolutionary steps the better to live out there. The narrator, who tells the story with a pleasant vibe, is onesuch, a calamarically long way from his Two-Stepper origins. With a follow-up comet to Shoemaker-Levy about to hit Jupiter, things start to happen…

Elizabeth Bear. The Deeps of the Sky.

Bear’s ‘Boojum’ and ‘Mongoose’, co-authored with Sarah Monette, were notably imaginative stories, but this one by Bear just fails to live up to the standard.

It’s set in the troposphere of a gas giant, and there’s a lot of use of the word troposphere and detail of atmospheric phenomena. The story details the nature of living in this world through a skiff-flyer, but simply explains rather than explores. There’s some risky mining to be done, and then the skiff-flyer has to make a decision about a strange visitor. The final few pages rehearse some discussions around the nature of the skiff-flyer and the humans who he has saved, but you could get much more out of this, and what we have is again a sketching out of issues.

A standout story from one James S.A. Corey – an author unknown to me, sitting amidst some very big names in this volume.

It’s a standout story and the more you read on here the more it will detract from your reading the story, and I would recommend you buy the anthology to read it, it’s pretty much worth the cover price on its own.

Without giving away too much, it’s a well constructed story, the narrative accelerating as the pilot of a spaceship reflects on how he got to the point where he is now and where he’s going to. This involves a touching love story, of Mars Colony-Earth politics and conflicts. The conversation amongst friends rings true, and all in all its got a depth of feeling that you rarely get in most SF.

It transpires, from a read of the author bio, that the one James S.A. Corey, an author unknown to me, is in fact the two authors Daniel Abraham and Ty Franck. Now, Abraham is known to me, most memorably from his work finishing off (if I remember correctly) the three-way story ‘Shadow Twin’ with Gardner Dozois, George R.R. Martin, which was a standout story in the early days of online sf on SCI FICTION (and expanded into the novel ‘Hunter’s Run’. Danged if I can find my review of that story from the days when I was hand-tooling reviews in html. Ty Franck I do not know from Adam. Their novel ‘Leviathan Wakes’ is set in an Earth/Mars/Asteroid Belt, and if that novel, which has been well-received, is half as good as this story, it will be exactly 2.7 times better than about three quarters of published sf. You do the math.

Sandra McDonald and Stephen D. Covey. The Road to NPS.

A more traditional SF story than others in the volume so far, but still well told and enough neat touches to make is rise above the norm.

Out on icy Europa, Ra (aka The Crazy Samoan) is six years into a contract that is little more than indentured labour, and he’s playing for high stakes when he underbids his employer for a contract to deliver goods to the regular shuttle. Just how high the stakes are is shown straight away, suggesting that his paranoia is not that, but that the odds are being stacked against him. There’s a surprise change to his travelling companion, a nicely portrayed teen, and …. stuff happens and they have to avoid more stuff to make the rendezvous.

John Barnes. Swift as a Dream and Fleeting as a Sigh.

Another strong story, with the nature of the omniscient narrator not revealed immediately, as humanity’s concerns, and the concerns and loves of individuals are seen through the lens of a creature with a much longer view, and a much bigger picture. Excellent.

A gentler story than you might expect, set post-Quiet War. The death of her estranged father on Dione leads his adult daughter to visit to spread his ashes, and in doing so she (and the reader) gets to consider the nature of the people who travel very, very far from Earth to find what they need to find. There’s a secret at the end, in a poetic finale.

Rusch takes a fairly mundane scenario and makes a most readable story. Through the well-observed downbeat and wry narrative voice of a spacepilot licence examiner, we look at some of the issues in making a life out there in the solar system, through two trips he sits alongside on yet another day at the office.

A clever story that looks at the exploration of the solar system via telepresence rather than in person, and to explain much more would be to give away too much, but suffice to say it provides an interesting perspective. And the reason for the title is a neat one when explained. Quite some way ahead of the tired scientists-stranded-on-a-moon-and-have-to-think-of-a-clever-way-to-escape trope. After all this is a collection that looks to the Fourth Generation of SF, as opposed to that First Generation trope, which is still used today becomes close to tripe rather then trope. (hmmm ponders whether the British word tripe is that well known…)

Hannu Rajaniemi. Tyche and the Ants.

A nice blend of SF and fantasy, set on the moon, through the eyes of a young girl being cared for by an AI, with some interesting friends. As to exactly who she is, why she is there, and what happens – well you’ll have to read the story!

One of a number of stories in the collection that looks to the Chinese as the people who will get us further into space. Baxter follows two driven men, Wei Binglin, and Bill Kendrick as their paths cross on the red planet. The latter might well have appeared in an earlier Baxter story or two, as he has backstory to his character, and Baxter does have his characters popping up here and their. Baxter looks at how Mars might bootstrap itself up from it’s humble origins with limited resources, and the role of ambition and drive to take us out into space, and the costs…

Used to trilogies that frequently go to the far reaches of the galaxy in both space and time, Reynolds still manages to get an epic sweep into this narrative. Set in Stilt Town on Triton’s cryovolcanic crust, Loti Hung, rock sculptor, gets paid a visit that causes her to reflect on one assignment, and one client that had a major impact on her. And the work she did had a major impact as well

A short, but taut thriller – and it takes a good writer to quickly get the reader engaged in the protagonist, socio-political background, and the challenge that the protagonist has to over come in the story. It feels like a much longer story, and you could see a whole novel set in this milieu. Excellent.

The restriction that stories have to work to in this volume is of a humanity constrained to the solar system, but Sterling laughs in the face of this restriction in providing the most unique story in the volume. The story starts out in ‘The Anteroom of Profound Regret’, where a husband is due to meet his wife for the structured conjugal rights that is the norm with marriages on Mercury. Sterling looks at modernity and futurity in an altogether smart way.

Excellent volume, just wonder how many stories make it into one or the other of the year’s best anthologies!