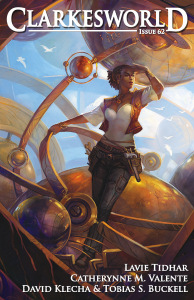 Online here, so read it before you read the following!

An excellent collaboration by Klecka and Buckell which looks at the near-future options for a technologically advanced, non-violent incursion force to achieve regime change. North Korea is the target, as UN troops, with a lot of backing from private companies in the form of sponsorship, and with more than one eye on the media coverage and consequent public opinion, as a city is built in double-quick time to provide a home for civilians wishing to flee the current regime.

Nong Mai Thuy is a Vietnamese Sergeant, with family history tied in to previous conflicts in the region, and the advanced armour she and her colleagues work make the story a Starship Troopers for the 21st century. But the ethical issues and the politics make it a far more subtle and complex scenario than shooting skinnies and bugs on alien planets!