Cory Doctorow. Someone Comes to Town, Someone Leaves Town. Tor, 2005. 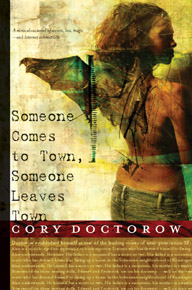 Cory Doctorow is feted as one of the few SF writers out there promoting the leading edge of new technology. He is a leading member of The Electronic Frontier Foundation, has written for the seminal tech mag Wired, and is one of those behind the leading blog boingboing.net

He collaborated with fellow-technophile(net nerd) Charles Stross with the well received ‘Jury Service’ short story on SCI FICTION (online here), and its follow-up ‘Rapture of the Nerds’ (Argosy #2). Another joint effort ‘Flowers from Al’ was collected in Haber/Strahan’s Science Fiction: the Best of 2003.

And they also co-wrote the story ‘Unwirer’ online to some extent, sharing their drafts through a blog

He has achieved some degree of notoriety in making freely available, under Creative Commons licenses, two previous novels (Down and Out in the Magic Kingdom / Eastern Standard Tribe) and a short story collection (A Place so Foreign, and Eight More).

This latter collection features the Nebula nominated OwnzOred, which is still online at Salon

Continuing this pattern, Doctorow’s third novel, ‘Someone Comes to Town, Someone Leaves Town’ is available in a variety of formats on Doctorow’s website.

So, you could just pop over to his site and download and read the book there. But you’d be missing out if you didn’t buy the book in dead-tree format, as it is a very handsome volume indeed, and provided that publishers continue to make books of sufficiently high production quality and license high quality cover art, that will be a minor threat.

And of course, you can also read a book quite comfortably in your garden, as I did. (I could have taken the laptop out into the garden, and read it on the laptop, but that’s for nerds. I could have downloaded it into my Palm PDA, but that went in the bin a while back through lack of use. Mind you, it it was on a Sony PSP…)

So what of the novel?

There is an Alice Through The Looking Glass quality to the novel, with two halves, mirror images, but with the reflection (and which one is the reflection?) oddly distorted.

One side of the mirror sees Alan, successful Torontoan (?) businessman, who has made money from opening a number of trendy shops of one kind of another, investing a lot of his emotional energy into renovating a des res in part of Toronto. The books oozes a sense of location, making Toronto spring to life, and as Alan lovingly strips down the wood from his house in the opening pages, we learn of his desire to write a novel in his new home, and can almost smell ourselves the stripper and the sandpaper.

(Mind you, as an aside, he waxes the staircase from the bottom up, leaving himelf trapped upstairs whilst the wax dries. But how the hell do you wax a staircase in that way – surely the laws of physics require you start at the top and work your way to the bottom? Otherwise you would have to wax with your head lower down the staircase than your feet, edging up the stairs backwards. If you get my drift.)

The novel tracks through two narratives. The first, familiar ground to those who have read a lot of Doctorow, is Alan’s role in wiring-up, or wirelessing-up, the neighbourhood, rolling out free and fast web access to the masses, using kit salvaged from dumpsters. He befriends a younger guy living (as most of the characters do) an ‘alternative’ lifestyle, and between them begin a process of persuading local businesses to host a wireless repeater node. This part of the story gets a little preachy at time, but Doctorow does at least have the good grace to have these erstwhie do-gooders given pause for thought by both the local telecoms company, who do not fall into a Bad Private Company stereotype, and a younger dude, who, they realise, sees them as somewhat reactionary middle aged old farts. This youngster is of the mobile phone generation, who sees the Internet as a bit of an anachronism.

This track of the novel helps give a solid setting, with the businesses, coffee shops, and the myriad of individuals who frequent them clearly showing Doctorow’s fondness for the city and people of his ilk.

But parallel to this, and with a narrative within a narrative, (it does not play out chronologically) is the darker side in the mirror.

A few pages in we find out that Alan, is the first born of several sons, each with a moveable feast of a christian name, although always starting with the letter representing their place in the birth order. His siblings are :

Billy – gifted with precognition
Colin – an island
David – (more later)
Edward-Frederick-George, roly-poly triplets born a month apart, and in ever-decreasing size, who live inside each other, like nested Russian dolls (new take on being a ‘middle child’!)
A strange family, but then again, with their father being a mountain, and the mother a washing-machine, perhaps not that strange. At first the reader ponders whether Doctorow is being fanciful with regard to gender roles, and that the father is the rock of the family, and the mother takes on the domestic chores. But, no, the father is a mountain, and the mother is a washing machine. The children have been brought up partly by the golems of the mountains, but also thanks to Alan’s hard work and dedication.
Doctorow gradually leaks out Avram’s life story, and the disturbing Davey is a very memorable nightmare creature, who murdered the young Alan’s girlfriend, and was in turn murdered by his siblings. But that was then, and this is now, and what remains of Davey is back, seeking revenge.

Andy finds allies and enemies in the house next door, including a be-winged Reubenesque female, who has her own secret past which has been kept hidden, and what family she has had have kept her from unfolding her wings (metaphorically and literally, as she grows up to be a loner), and a brother/sister combo with their own can’t live with/can’t live without relationship.

The two narratives progress, forcing the reader to pay attention at times, as Alan pays a return visit to the mountain (perhaps slightly less dramatic than might have been the case), and the story reaches a climax, as does the novel within the narrative, which involves conflagration, and further fleeing rather than concluding family business.

A real page-turner, with Doctorow showing facility with both the genre and the more mainstream content. At times I was minded somewhat of Joseph Heller – maybe Doctorow has it in him to write The Great American Novel. ahem. The Great Canadian novel.