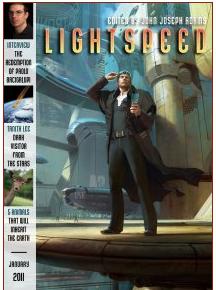 Lightspeed Magazine garnered lots of praise in 2010, and has several stories scheduled to appear in the various Year’s Best volumes due to appear later this year. As a consequence, I will be reviewing all their stories, and those that appear on the equally-well received Clarkesworld Magazine during 2011.

First up in 2011 is a story from an author new to me, and as it’s an online story, it would make sense for you to read it before going any further. It’s an easy read, and is quite short.

It’s an ‘easy read’ in that it’s written in the format of diary entries from a ten-year old boy. It’s near future, and the boy has genetic modifications so that he can get the maximum ‘benefit’ from the social networking opportunities out there. He’s friended a lot of people out there.

The story takes a darker tone as a local who doesn’t quite fit into this networked global love-fest, and he and his fellow school children are encouraged to exact the ultimate social cleansing.

It’s not quite up to the standard of a Year’s Best collectee – a simple, not particularly sophisticated central conceit, a simple narrative (due to the age of the diarist), and a not particularly sophisticated dramatic crux, marking it out as more of a story you would see on a small press e-zine (or whatever the equivalent for an online magazine is of a small press/semiprozine in the printed world.)