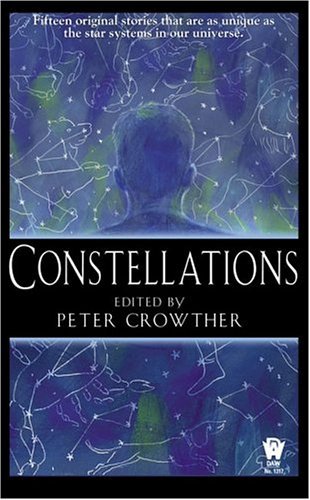 The third in a sequence of DAW anthologies edited by Peter Crowther in recent years. Moon Shots (1999) and Mars Probes (2002) both had several stories featuring in one or more of the annual anthologies. Each of these collections had a specific theme (no prizes for guessing), and this one has stories set ‘on or in star systems or that (are) somehow concerned with the figures in our constellations’. The anthology turned out (as opposed to by design) as being an all-British one, so what we have is a showcase of most of the best of British SF writers.

The collection starts with one of Eric Brown’s Kethani series of stories, which have featured in Interzone, primarily, for many years. The conceit is that the Kethani have visited Earth and their technology has reduced death to a minor nuisance. With the aid of a small implant, humans are resurrected after death on the Kethani howeworld, and after some months are returned home. Brown has produced a string of stories, each a vignette of how this has affected particular individuals, mostly featuring people living in rural Yorkshire. A Heritage of Stars follows this pattern, in which a couple are separated by death, but the parting, a temporal one of some months, threatens to be a more fundamental parting of ways.

Next up is Paul McAuley’s Rats in the System, which takes us further into humanity’s future. The Singularity has arrived, with Transcendent AI’s fleeing Earth, and setting about their unfathomable workings. Humanity is less troubled by them than by the Fanatics, whom worship the Transendents as Gods, and have begun a jihad against those who do not follow their creed. We see these big issues through the lens of a small battle in the much bigger, bitter war, as two humans fight for their lives against overwhelming odds.

Brian W Aldiss’ Ten Million of Them provides a Very Big Picture, as a deity on a galactic scale views, in a detached manner, humanity’s struggle to survive. As Sol expands, all manner of life take to the seas of the Earth, evolving into aquatic forms. Others have fled to the Kuiper Belt (the ten billion rocks in that Belt accounting for the title), but it is a much smaller being (the humble flu virus) which makes its escape.

Another shorter piece follows, Tony Ballantyne’s Star, in which a young girl want to be a star – literally. As it is the year 3000 desires such as this are attainable, and with the help of more powerful beings, she is able to become just that. However, being a little human girl, she is never satisfied…

Stephen Baxter is prolific at various lengths, from short, to long, to very long, to multi volume mammoth (literally!). His XeeLee sequence of short stories have featured in the likes of Interzone and Asimovs, and in Lakes of Light he provides another vignette, although whereas Brown’s earlier Kethani story had (typically of that series) a more homely Yorkshire setting, Baxter serves up a monstrous conceit (as is his wont). Dealing with far future humanity, and variations thereof, he posits a marvellous artefact : humans ekeing out a life on a hollow sphere encircling a sun. Is it a Xeelee trap, or can humanity turn it to their advantage?

One of the less well known names in the volume, Roger Levy, provides in No Cure for Love a shorter story set on a Mars-Earth shuttle. There’s no plot as such – the protagonist is in a virtually permanent state of mental and physical limbo, as he has opted to stay awake on the craft as it shuttles between its destinations. The constellations are to him like spores, and he ponders his role in life and death whilst speaking to the injectioneer.

Ian Watson has of late been writing a lot in the very baroque space opera ‘Warhammer 40k’ universe, and The Navigator’s Children’ is very resonant of that milieu. I speak not from personal experience, but from the occasional glance at the magazines and books which my eldest son consumers voraciously. The story is by way of a letter from Master Lope de Vega, Chaplain-Confessor. Humanity is fighting the alien Eks, and religion is heavily involved (‘You might say that the upright cross of Jesus (+) is fighting against the skewed alien cross (X) of the Eks in a war to establish the nature of God’). v-e-r-y Warhammer 40k.

But the war is an interesting one, as it has been found out (by prayer, of course) that we are living in a simulation, being run by a planetary-mass computer carrying out 1042 computations every second. The battle with the Eks is made more complicated because the very constellations change, making astral navigation very trickly. de Vega has to have his wits about him to help defeat the Eks, aided by his ‘little women’, but very much not abetted by his subordinate, who challenges him. Very dark, and top quality.

Keith Brooke is another Interzone regular, whose short fiction has been bubbling under for some time, but who has had some success in recent years in writing children’s fiction. Here he provides a short piece, ‘A Different Sky’ in which a young man comes to realise his role (albeit a small one) in the cosmic panoply of events, the scale of which can be seen in the constellations. He has had a role placed upon him, making him at once remote and otherworldly.

Gwyneth Jones’ ‘The Fulcrum’ is by contrast a much more claustrophobic affair, set on board a very seedy vessel, full of criminals, low-life and aliens on exercise bikes. There’s more than a touch of the Wild West about the story – just imagine Deadwood with most of the swearing removed, but a quasi-human grotesquely being milked of a very precious fluid, skanky VR ho’s, criminals and prospectors. Well worth a read, although the squeamish may grimace once or twice.

Lovegrove is primarily a horror writer, but stays away from horror, and indeed, from SF, in ‘The Star Party’. He certainly addresses the theme of the book, in a story which finishes with a group of friends staring at a meteor shower, but there isn’t any sfnal element. Nicely written though.

Probably the pick of the collection for me, Ian McDonald’s ‘Written in the Stars’ addresses the theme of the volume with gusto. He portrays a society in which every person’s every move is governed by analysis of horoscopes, with Tall Dark Strangers walking the streets, and with government officials responsible for the production of several personalised ‘scopes for each individual every day. When one official realises that he has got the wrong horoscope, he sets out to sort the problem out. He gets more than he bargained for, in meeting someone who challenges the orthodoxy and ignores the horoscopes in favour of exploring the real nature of the heavens. The world-building is particularly effective. And potatoes for tea.

Another particularly strong story is Adam Roberts ‘The Order of Things’ which depicts a society which is very much driven by a religious desire to have a very ordered society and planet. That goes as far as straightening out the coastlines, and as well as making the planet a much ordered place, the very stars themselves have had to be addressed. Strong-in-the-Lord struggles with his son, who has heretical thoughts, and who finally challenges him to face up to what is happening. As with the previous story, an effective piece of world-building in a short space of time, with the veiled ultra-orthodox male leads convincing.

‘The Little Bear’ by Justina Robinson is a heart-rending story of loss across quantum realities. When an experiment goes slightly awry, a husband and wife are parted, and we see several realities in which who is lost to whom is slightly different.

Colin Greenland’s ‘Kings’ is an atmospheric tale in the Holy Land, a contemporary search for that to which a Guiding Star may be leading.

The final story in the volume is from Alastair Reynolds. His ‘Beyond the Aquila Rift’ shows what he can do at shorter length – for my money I much prefer him at this length than at fat space opera length. He effectively twists two threads of the story together, tying them up at the end with a flourish. It is a simple plot – a pilot awoken after a much longer spell in suspended animation. Where he is, but more importantly, how he is, is cleverly teased out, leaving the reader (if not the protagonist) with a view of a tiny speck of humanity in a very big picture.

All in all, an excellent SF collection. The pick of the bunch for me are Baxter’s ‘Lakes of Light’, Watson’s ‘The Navigator’s Children’, McDonald’s ‘Written in the Stars’, Roberts’ ‘The Order of Things’, and Reynolds’ ‘Beyone the Aquila Rift’. Each of these provides something that bit special – either a central image (Baxter), some rich environments (McDonald/Roberts) or reaches out to the stars (Reynolds). If it’s SFnal bang for your buck you’re after, you won’t get much better value for money than this during 2005.