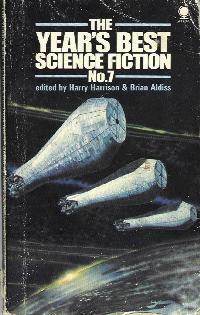 Thestory that led to the film.

The very short life of George Herbert Mason, a figment of a Daniel R. Pettigrew dream.

Robert Sheckley Welcome to the Standard Nightmare.
Originally in : Nova 3.

Johnny Bezique makes first contact. On the planet Loris he achieves high status, with major implications for all back on Earth.

Romantic Fantasy – Lambant and Prian on the first day of the autumn fair.

Far Future Deep Space War (extensive description of combat tactics), with a Marine who chooses to leave the Space Fleet and finds civilian life not to his liking.

Thomas M. Disch The Birds
Originally in : The Ruins of the Earth

Robert Silverberg. The Wind and the Rain.
Originally in : Saving Worlds

Reclamation teams try their best to restore a desolate Earth.

Max Beerbohm. Ten Years Ago.
Originally in : A Peep into the Past.

Not Science Fiction – description of a painting.

Tor Age Bringsvaerd. The Man Who Collected the First of September 1973.
Originally in : Gyldenhals Magasin.

The title says it all.

Lieutenant Feather (popularly known as Captain Nemo) makes a long space trip to save the Earth, and returns (relativity) many centuries later.