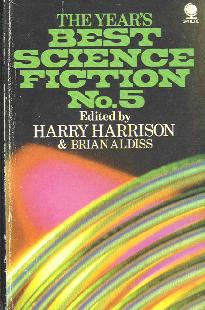 Robert Sheckley. Doctor Zombie and His Furry Little Friends.
Originally in : Can You Feel Anything When I Do This?

A jokey, trite title, for a spine-tingling teaser set in the back streets of Mexico City. Can mankind’s threat to other species justify the genetic experiments being undertaken to provide a challenge to our continuing threat of extinction of other species? A short tale with a big dose of the eldritch creepies.

First Contact with Mankind’s chosen ambassador having a big choice to make – will he choose the right option. A short, mini-episodic story.

Arthur C. Clarke. A Meeting with Medusa.
Originally in : Playboy

Falcon, surviving an airship crash (more than surviving!) is the logical choice for a balloon-drop visit to Jupiter’s atmosphere. Lots of science stuff for the discerning Playboy reader (“I only read it for the fiction, darling!”).

Donald Barthelme. The Genius.
Originally in : The New Yorker

Contemplation (yawn!) on the nature of Genius. Pretensious silliness.

Little Mister Kissy Lips and his gang in NY.

Very short, very lightweight newspaper review of the 2016 revived stage show ‘Hair’. You could give the idea to a class on their first day of Creative Writing in SF 101, and get better material.

In the depths of the charming English countryside, returned to its idyllic beauty by population control, an elderly novelist is visited by a journalist. They both know that the novelist’s obituary is being written. The novelist has been studying the statistics behind the obituaries and has spotted a pattern. But just for whom does the bell toll?….

Brian W. Aldiss. The Hunter at his Ease.
Originally in : Science Against Man

Against a background of a global First World/Third World conflict, a remote island is being bulldozed to be used as a base from which Africa can be bombed. The local population are forced to submit to the rule of the developers, and the terrible price of ‘progress’ is shown, with a village elder and two young idealists paying the ultimate price, and one of the scientists a lesser, but still painful, price.

A multiple-choice flowchart to assist with SF/horror movie plots.

Frustration with sidewalks made perilous by dog poo leads one man to make a stand. Or a squat, to be more precise.

Extremely dense Jewish SF. If you have read it, why not try the online quiz here, and if you want to get a feel for the type of story this is, check out this site or this site. If I had a week to read it, re-read it, do a lot of research into Jewish orthodoxy, history and attitudes to idolatory, then perhaps I could begin to provide a helpful review!

Peter, after bemoaning the boring nature of his life, meets up with his friends who suggest they go ‘torming’. They all seem to know what they’re talking about. He doesn’t.

A Spinradian view of the impact of the permanent use of psychedelics in the near-future. Even institutions such as the Catholic Church and the armed forces make use of psychotropic drugs, leaving people to wonder how life could have been bearable when there was only real reality.