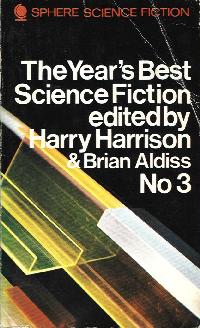 Anthony Burgess. The Muse.
Originally in : The Hudson Review

Paley, a 25-year old literary historian, is transported back in time and to an alternate Earth, to discover whether William Shakespeare actually wrote all the works credited to him. He discovers rather more than he expected.

A FTL-fitter’s mate bemoans the the loss of his love, Nellie, to an android in the shipyard.

Bederkind programs himself into a powerful computer.

Post-holocaust scenario – a female without arms, with the assistance of her wolf, trap a physically perfect, but limited-intelligence survivor.

Previews the ecological catastrophes leading to the sooner-rather-than later downfall of mankind.

P. g. Wyal The Castle on the Crag.
Originally in : Fantastic

The history of a fairy-tale castle and its progression to a nightmare conclusion centuries hence.

Two scientists on Libra Exploratory Mission Base welcome assistance from ten clones (5 female, 5 male – all cloned from the same genius).

The US is waging global war with just about everyone. Brutal scenario in pastoral England. Not SF.

Pilots of intergalactic fighters have to undergo extremely distressing enclosure in womb-like eggs to enable them to endure the high-G stresses of battle, resulting in deep psychological trauma when removed from the eggs.

Fingest travels back in time to fertilise a prehistoric woman, to give the human race a genetic boost.

Garson Poole wakes up after an auto-crash to find that he has lost a hand. He then finds out that he is in fact an ‘electric ant’ – an organic robot. He further finds out that what he believes is his subjective reality is in fact being fed from a micro-punched tape in his chest cavity. He explores with this tape, affecting his reality. He totally bolloxes the tape, with a major affect on his reality, and on everyone elses.

Bruce McAllister. The Man Inside.
Originally in : Galaxy

Algis Budrys. Now Hear the Word of the Lord.
Originally in : Galaxy

Amos Onsett believes that the Earth is at risk from aliens, posing as humans. In fact Walter Kenneally is a robot sent back in time by humans who are unable to time-travel, to prevent the outbreak of WWIII.