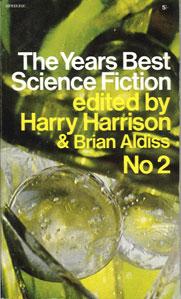 Candar, a shape-changer, attempts to duplicate one of six exploration modules that are carrying out a recon.

Part of rural England is affected by time distortions, with a husband following his wife into the future.

J.R. Pierce. The Rime of the Ancient SF Author, Or Conventions and Recollections.
Originally in :

Whilst his body is in intensive care, living out its final hours, Dave is elsewhere, visiting a hotel with an annexe. And more.

Patients are opting for metal organ transplants rather than organic ones, whilst the Metallos are increasingly opting for organic replacement parts. At which point do mankind and robotkind merge?

Multi-perspective on the stupidity of war – shades of Catch-22.

Hamish and Nelda arrive at the Golden Acres retirement complex and have immediate misgivings.

Fritz Leiber. One Station of the Way.
Originally in : Galaxy

The spaceship Inseminator is travelling the Universe, taking part in an immaculate conception on a number of planets.

Computer MLSA 5400 had been programmed to develop a personality, which it has been doing for five years. But the 5-year personae is having nightmares.

Robert Silverberg. To the Dark Star.
Originally in :

A three-person crew are to view the death throes of a giant star. A human, an adapted girl, and a microcephalon. One of the three has to risk their life to achieve close up data collection.

The last members of Mankind graciously leave their accumulated wisdom for the race that will follow them.