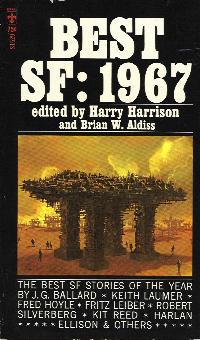 Opponents of a global 21st century reactionary regime are transported to a prison camp in the Cambrian period.

Why would the Last Man on Earth be playing with a bucket and spade?

Inventor Emil Hart uses his bicycle-powered time machine to travel forward to 1973 a.d. He finds that events in the future can actually have an impact of events in the past.

Three explorers on Moon, one of whom finds water in the form of ice, but has to be rescued by one of his colleagues, who redeems himself after a previous fatality.

Kit Reed. The Vine.
Originally in : The Magazine of Fantasy and Science Fiction

A family tends a humongous vine generation after generation, until the vine begins to….

The gaussjammer Lode Trader crashes onto a planet, leaving only the priest Lee Chang alive. He is kept company by the cargo of robots.

Frank M. Robinson. The Wreck of the Ship John B.
Originally in : Playboy

Long-haul freighter Cassiopeia, en route to a distant colony planet, and manned by several increasingly insular men, finds the drifting body of a crew member of a previous freighter, and shortly after the empty freighter and similarly drifting corpses of the rest of the crew. They are able to identify the reason behind the loss of this and other freighters.

Kris Neville. The Forest of Zil.
Originally in :

On a distant planet covered by trees, the forest moves in the warm sunlight to the motion of the gentle breeze, making their soft sounds, zil, zil, zil.

J.G. Ballard. The assassination of John Fitzgerald Kennedy considered as a downhill motor race.
Originally in :

Argues that a less conventional view of the events leading to the assassination of JFK may provide a more satisfactory explanation. Uses Alfred Jarry’s The Cruxifiction Considered as an Uphill Bicycle Race as a model.

James Thurber. Interview with a Lemming.
Originally in : My World – and welcome to it.

A scientist and a lemming have a conversation about their species respective failings. Why do lemmings run en masse over cliffs? ponders the scientist. The lemming replies : we have wondered why humans do not.

An old Lady torments a doctor’s receptionist on the other end of her phone.

A Mark XVIII Combat Unit (bolo) long-buried in a concrete tomb, is reawakened by construction work. Reynolds, an old soldier who fought alongside the unit in his youth, saves the day.