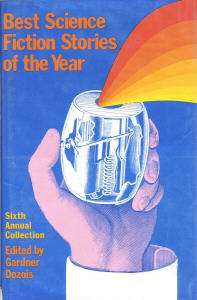 Ursula K. Le Guin. The Diary of the Rose.
Originally in : Future Power

Diary notes of a psychoscopist, working in a clinical therapeutic environment. One of her cases fears ECT as she strives to identify the nature of his diagnosed psychiatric problems.

Alternate History, with the Battle of Little Big Horn taking place as much in the sky as on the ground.

Potential victims of an air crash are saved from their fate by far future teams who themselves are facing a bleak future.

Kate Wilhelm. Ladies and Gentlemen, This is Your Crisis.
Originally in : Orbit 18

Jake Saunders. Back to the Stone Age.
Originally in : Lone Star Universe

The war in the Pacific continues, and Japan, refusing to surrender, is bombed into eventual submission, including bomb runs which include families of killed servicemen.

Gypsy curse, which a computer programmes passes on.

Michael Bishop. The Samurai and the Rose.
Originally in : Magazine of Fantasy & Science Fiction

Set in the domed Atlanta UrNu series – an odd couple (a bonsai expert and a rollerblader) resolve their relationship and personal issues.