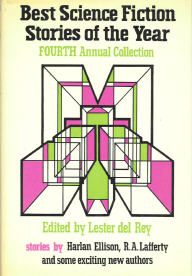 F.M. Busby. If this is Winnetka, You Must be Judy.
Originally in : Universe 5

Humanity is involved in a galactic spanning conflict. Lynn Ferraro is an Amicus Hostus, a Friend of the Enemy, whose role is to prevent atrocities against the Kyben. On Epsilon Indi IV the enemy are attacked with maximum aggression.

Paints a vivid picture of a non-human, arial/avian race travelling to find another planet on which to live. The eldest living member of the race yearns to fly under gravity once more.

Carolyn Gloeckner. Earth Mother.
Originally in : Long Night of Waiting by Andre Norton and other stories.

Two women meet after many years. One works in an artificial reproduction centre, the other, who supplanted her in a relationship twenty years ago, is faced with some shattering possibilities.

Far future, with many animals now attaining a high level of intelligence. One, a horse, has a dream, which it is willing to work to attain for many years.

Mildred Downey Broxon. The Night is Cold, the Stars are Far Away.
Originally in : Universe 5

An old star-watcher seeks truth in the stars.

Planet Earth if fighting a desperate rearguard against alien invaders. The resourcefulness, ingenuity, and personal sacrifices necessary to fight back are stretched to the limit. The opening scene is vivid (opening scene of Terminator)

and the rest of the story is strong and emotionally gripping.

R.A. Lafferty. And Name My Name.
Originally in : Orbit 13

A reckoning is upon the earth, and the races of the earth are called to be judged and named.

John Brunner. What Friends are For.
Originally in : Fellowship of the Stars

A mother and father are driven to distraction by their wayward son. An off-planet solution is their last throw of the dice. The boy responds to his alien nanny/friend.

Paints a vivid picture of life as a medieval serf. Tam is slightly different in that he pictures a life free from drudgery.

Robert Silverberg. The Man Who Came Back.
Originally in : Galaxy, December 1974

John Burkhardt returns from a hard, hard life on a colony world to seek his true love.

There is a British comedy film starring one Will Hay, in which he infiltrates a German military training unit and teaches the German spies, once under cover in England, to use a two-finger greeting to pass themselves off as British.

Mankind is suffering under the harsh yoke of alien occupation. One man sees that there is perhaps hope.

If medical science is unable to provide a cure now, then perhaps the future has the answer?

An alien artefact with time travel properties is found in private school grounds.