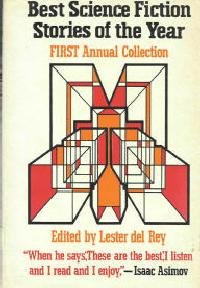 Robert Silverberg. Good News from the Vatican.
Originally in : Universe 1

A new Pope is being chosen. Will the white smoke herald the first robotic pontiff?

James Tiptree Jr. I’ll Be Waiting for You When the Swimming Pool is Empty.
Originally in : Protostars.

Hugely entertaining ironic romp. Young Cammerling, a nice Terran Boy, takes a year out, and finds himself on Godolphus Four.

Upon landing he is treated to the site of a huge battle, in which the opposing armies show no mercy. Being a nice Terran boy he decides to spend some time on the planet and to teach the warring factions the errors of their ways. Over a few years he gradually raises the denizens of the planet to a more civilised state, without, like, imposing on them external customs and mores.

Harry Harrison. The Wicked Flee.
Originally in : New Dimensions I

Thomas N. Scortia. When You Hear the Tone.
Originally in : Galaxy, January 1971

Burt K Filer. Hot Potato.
Originally in : The Many Worlds of Science Fiction

Ultra short. A young boy and his family go on a day trip to see a real tree.

R. A. Lafferty. The Man Underneath.
Originally in : IF Science Fiction, January 1971

B. Alan Burhoe. Ornithanthropus.
Originally in : IF Science Fiction, November 1971