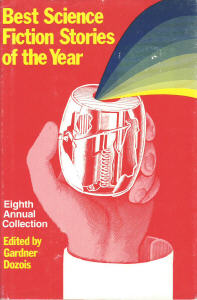 John Varley. The Persistence of Vision.
Originally in : Magazine of Fantasy and Science Fiction, March 1978

During a slight economic downturn, the protagonist hits the road. He finds himself living in a community of deaf-blind people, but it is he who is cut off, not they. He tears himself away from the community, painfully, only to regret it.

The three computers in orbit around the Earth are threatened by a tiny metal-eating virus. Two trouble-shooters are sent out to solve the problem, which they of course manage to do. Not a great deal different from a lot of Asimov’s early fiction really – like the one about the two spacemen who travel around the sun and get alternately baked and then frozen because they didn’t read the mimeographed instructions before lift-off and didn’t spot the thermostat control.

One from the author’s Dream Archipelago series. A war vet with sick leave and gas-induced perception nightmares tries to find solace and freedom in the pleasures of the flesh.

Prehistory yarn, with competing variants of Home Erectus, some with decidedly odd attributes.

Against a background of domed cities, in the author’s UrNU series, a new member joins an intimate group of residents of a retirement home.

An alien hunter hops around the 50s, 60s and 70s, finding, in the process, a lot more about himself. Notable for some extremely unpleasantly graphic, and unnecessary, depictions of sexual violence.

Gregory Benford. In Alien Flesh.
Originally in : The Magazine of Fantasy and Science Fiction, September 1978

Reginri went off-world in search of work, and found himself carrying out experiments attempting to communicate with huge whale-like intelligent creatures. The work involved climbing into the creatures, and once inside he finds out more than he anticipated.

A Moslem visitor to the ruined USA finds himself becoming intimately involved with the dust, decay and depravity to which that bastion of western civilisation has descended.