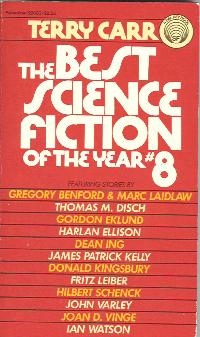 An intriguing tale of a very conformist Luna community. Shunning all individuality, not only are names discarded in the community, but so are all external sexual wibbly bits, leaving members as asexual as a Barbie doll. (No mention of Ken though).

A murder takes place in the community, and the cop assigned from the city has trouble making any headway in identifying the victim, or the killer, or any motive.

Suffice to say a merkin (a female pubic wig) is a key to this thriller – and there aren’t many thrillers which can make that claim!

A Hiss of Dragon. Gregory Benford and Marc Laidlaw.

A not altogether succesful collaboration. On a terraformed planet, an action-packed story in which genmod airborne flora and fauna provide the living for humans pedalling above the hostile ground. Narrowly escaping a ponderous, gas-filled dragon whilst out gathering in a crop, Leopold finds himself facing a human, and more dangerous, enemy.

Some nicely imagined and well described settings, but the dramatic events of the story are fairly mediocre.

A very dark look at the way society in general, NY in particular, is heading.

The protagonist sees in his own mind the city being swallowed, submerged by a black detrius, an all-enveloping dreck. He fixates on a young woman in a green cape, and, following her to an ice-rink soons finds himself in an altogether strange, near-future environment. On the observation deck of one of the towers of the World Trade Centre to which he as been transported by some unknown means, he sees the city is ruins with the dreck foam covering all but the tallest skyscrapers. A group of soldiers are firing a cannon at the Empire State Building. Can he and the green caped girl stop them?

To Bring in the Steel. Donald Kingsbury.

An interesting mixture of space adventure and psychology.

Out on a deep space mining operation, Kell hears that his ex-wife is dead, and wants daughter, with whom he has had little contact, to come to stay with him. A very insular, cold and detached personality, his chickens at first threaten to come home to roost as this shipmates object. But he is a man who is used to getting his way, and in this case hiring a notorious prostitute to act as the child’s governess, is successful.

Lisa Maria, said prostitute, is lured by the money on offer, and the chance to free herself from her thoroughly unpleasant boyfriend/pimp.

The developing relationship between Kell and Lisa Maria is well-handled, although the rescue in space finale is somewhat incongruous.

The time machine in question arrives/leaves in 1990, at the point at which is has gathered enough momentum from travelling into the past to launch itself into the future. The story unfolds as the time travel machine and its occupant in effect move backwards towards the moment at which they began their journey, when they once again leave/arrive.

The nature of the traveller, and the impact on those observing and trying to interact is expertly done.

A most unusual story. Val Clarke was borne with an ‘autosomal dominant inheritance’ which gives her the external appearance of being severely mentally retarded, but intellectually normal. She is working with Dr Chris Maffei who is working to expose abuses in the residential care of people with mental retardation (and planning a best-selling book on same).

Maffei is working with/exploiting Val by having her placed in residential homes where she can observe abuses and communicate by a transmitter embedded in her skull.

In one home Val finds something very strange going on, but is at first unable to identify exactly what is happening. Whilst observing, Maffei is busy having sex with the receptionist at the institution.

Up to this point the story is quite mainstream, with complex characters and interactions.

After this things get a little strange. One of the residents is a totally blind girl who appears to have some strange powers. The owners of the hospital turn out to be drug-producers. Once Val’s undercover work is threatened, and the receptionist is about to be, at best injected with drugs, and at worst used, protein-wise, to feed the drug-production, things kick off big time. The blind girl turns out to have major telekinetic powers, and in a scence straight from a horror movie, makes the bad guys kills themselves quite gruesomely.

The end sees Val and the blind girl taking control of their lives.

Count the Clock that tells the time. Harlan Ellison.

Some echoes ‘..and I must scream’ in the nightmare scenario of walking around an alien, grey-shrouded landscape. In this case the landscape is home to people who have largely wasted their lives. Ian Ross finds himself in this most desolate landscape, meeting other sorry mortals. Finally a true relationship appears to offer the opportunity to redeem himself.

The story was written, according to the introduction, at the 1978 World Science Fiction Convention in Arizona, by Ellison, sitting at a desk in the foyer. Was he trying to tell us something?

The Morphology of the Kirkham Wreck. Hilbert Schenck.

A storm is battering a rugged coast-line, and a ship is in distress on the rocks. Out go the coastguard, rugged men led by Keeper Walter Chase.

The storm is fierce and the rescuers only barely managed to row out to the wreck. Several times during the rescue events are about to take a disastrous turn, but Walter is, unconsciously, able to tap into a time stream and go back to made adjustments to prevent said disasters (in one case the mast of the wreck is about to break, partly due to being made of faulty timber – Walter goes back to when the tree with the fault was about to be sawn down, and has the lumberjack spot the fault and choose a nearby tree without a flaw).

Finally the rescuers and those on the wreck return to land.

A would-be artist, frustrated by his lack of ability, undergoes an operation in eastern Europe, in which he hopes to have the genius of Vermeer overlaid onto his own personality.

Moving to Holland, he finds he can in fact reproduce Vermeer’s masterpieces, including some forgotten masterpieces.

But is he Vermeer? And can he call his talent his own?

The Man Who Had No Idea. Thomas M. Disch.

With conversation allowed only by licence, Barry Riordan is frustrated by his attempts to get his licence. Finally he gets a Temporary Licence, and has to seek out three individuals with full licences to endorse him.

A cruel satire on modern lives and mores.

The second published story by Kelly. A radical option in treating psychopathic murderers is proposed – kill them and bring them back to life. Will this taste of death, linked to their desire to murder, prove a sufficiently aversive experience to alter them?

Carla Walsh, in the middle of splitting with her partner, reluctantly agrees to work on the program. Unfortunately, the chosen guinea-pig proves to be a bad choice.