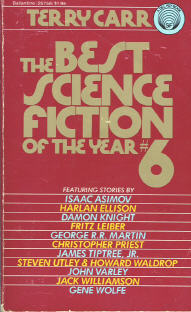 Damon Knight. I See You.
Originally in : Fantasy and Science Fiction, November 1976

Relates the effects of the invention of a box which enables viewing scenes regardless of time or geography.

John Varley. The Phantom of Kansas.
Originally in : Galaxy, February 1976.

Multiply-murdered cloned artiste, who finds out that her would-be murderer has a lot in common with her.

Harlan Ellison. Seeing.
Originally in : Andromeda I, The Ides of Tomorrow

Longevity, seen through one whose life has been linked to Halley’s Comet.

James Tiptree Jr. The Psychologist Who Wouldn’t do Awful Things to Rats.
Originally in : New Dimensions 6

A scientist in question is obviously unsuited to his work, but a revelatory (absinthe-fuelled) cartesian experience (and you don’t many of those in SF), changes his outlook.

Little Tib is blind, and fleeing. He is befriended by Mr Parker and Nitty, two hobos down on their luck. Little Tib has some rather unusual powers which he needs to keep his freedom.

A love story, with passion undimmed over many (time travel) years.

The planet Atlas is much, much too large to be a planet. An enormous tornado sucks Max Mayfield high into the air, where one of the secrets is revealed.

A corpsehandler seeks love amongst a bleak existence. Chilling and well done.

Alternate History, with the Battle of Little Big Horn taking place as much in the sky as on the ground.

A robot with an artistic bent seeks the ultimate freedom.