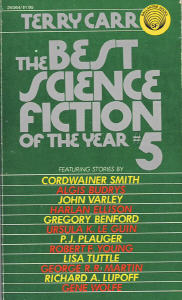 Cordwainer Smith. Down to a Sunless Sea.
Originally in : Fantasy and Science Fiction, 1975.

Some ten years after Smith’s death, a manuscript completed by his wife. Lord Kemal bin Permaiswari, Lord of the Instrumentality, pays a visit to Xanadu.

Clone-siblings meet on Mercury and resolve issues surrounding their relationship.

Gene Wolfe. The Hero as Werwolf.
Originally in : The New Improved Sun, 1975.

A corporate response to one of their staff members inventing a time machine.

Harlan Ellison. Croatoan.
Originally in : Fantasy and Science Fiction, May 1975.

Down in the sewers, something stirs…

Hoaxer comes out of cryogenic suspension in the far future, pretending to be John Lennon.

A dark near-future, with a fascist government, and the emergence of a new continent.

“..an ingenious tale of time travel, multiple personalities and murder..” told from several perspectives (but the same person).

Lisa Tuttle, George R.R. Martin. The Storms of Windhaven.
Originally in : Analog, May 1975.

Immortality – a ‘child’ that has been so for centuries.

John Varley. In the Bowl.
Originally in : Fantasy and Science Fiction, December 1975.

Setting off to Venus with eyes bought from a second-hand organbank is not a good start.

Richard A. Lupoff. Sail the Tide of Mourning.
Originally in : New Dimensions 5.

Australian aboriginal Dreamtime in the furthest reaches of the galaxy.