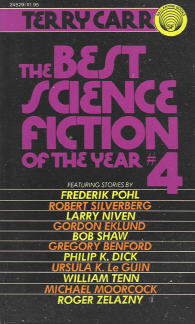 The collection starts of with a rip-snorter. Far-distant aliens are communicating with and trading on Earth, through humans whom they purchase for the purpose of being their mouth-pieces and their eyes on our world. Pohl takes us through the story through the eyes of one such unfortunate, Wayne Golden, whose rare time off work provides him with time for a grabbed meal and drink and onanistic relief. We feel pity for him, and his unconsummated love for a fellow ‘purchased person’, Carolyn. The way that Pohl handles the almost claustrophobic and schizophrenic impact of having your mind and body (and bodily movements) controlled by aliens is consummate.

The pity we feel for Golden gradually diminishes, as Pohl slowly reveals the back story, as to why those individuals have taken over by the aliens. For not only is Golden a criminal, he is a serial murder and paedophile, and at the end we witness, dramatically, the darkness buried in the core of Golden (entirely misnamed!) as he is united with his love, and he cannot keep his hands off her (neck).

Part of the author’s ‘Dancers at the End of Time’ sequence in which dilettante end-of-time post-humans with virtually limitless power prove to still have the same foibles and weaknesses. Here a trick is played on Werther de Goethe, a wicked trick which has him believe that the young girl washed up at the foot of his castle is a true child, unsullied and available for him to educate and cherish and love. But de Goethe finds his fatherly love gradually, horribly changing and he is finally able to embrace the mortal sin for which he has been yearning.

An unsparing glimpse of a shallow, facile future, and a mirror in which we see those who even in this day and age have wealth and beauty and leisure and waste it.

A scientist whose theory about the alien artefact they find on Mars leads him to being ridiculed, finds that he has to put up or shut up. He puts up, and the tiny black hole within the artefact is let loose, showing the leading doubting Thomas (quite categorically and fatally) that his criticisms have been unjust. Niven has fun with the underlying science and the motley crew of scientists and spacefarers on Mars.

As with the Pohl story, a truly individual concept. Technology has enabled some of the population to be ‘revitalized’ after death, but whilst not being ravening zombies, they are cold-hearted and distant creatures. One man, bereft at losing his wife, tracks her across the world, notably to Zanzibar, to reclaim his love. When it is clear that their love can not staddle that divide, he must decided whether he is to make the crossing. And having done so, we are not suprised to find that once among the dead his undying love has in fact died.

An excellent story from a master, and I had to top-up the bath twice whilst reading it!

Ursula K Le Guin. The Author of the Acacia Seeds and Other Extracts from the Journal of the Association of Therolinguistics
Originally in : Fellowship of the Stars

A pseudo-scientific paper in which we find out that not only is there a higher level of intelligence in a range of animals (ants, dolphins and penguins) but also lichen – and it has been us who have been too dense to spot their writings!

Short action piece, creating successfully in words an aerial battle between good and evil – the good being a cop, who is chasing the evil jet-packed murderer.

Philip K. Dick A Little Something for Us Tempunauts.
Originally in : Final Stage

One of the pleasures of only slowly reading my way through the classics, is the delayed (almost Tantric) pleasure one gets from reading quality short stories. Wading through some fairly routine current short SF does also enhance the appreciation of ‘the best’, and here we have Dick overlaying a time travel conundrum with his trademark paranoia and horror. US time travellers, tempunauts, find that instead of travelling 100 years into the future, they have gone merely a few days. And in doing so, there are only too cogniscent of the fact that their return has been/will prove to be fatal, for their is a state procession being planned for them.

Addison Doug is one of the ‘nauts, and he begins to believe that they are trapped (as is the rest of the Earth) in a closed time loop, doomed to forever repeat the period between their starting their trip and their (fatal) return. Having found out the cause of their fatal return journey, they have to decide whether to change or not to change their return journey in order to get out of the loop. Or does the loop exist merely in Addison’s head?

Further trademark paranoia in terms of the media manipulation, and the Russian threat added a further dimension to the story. Interestingly, editor Carr ponders whether Dick would follow Vonnegut and Bradbury as SF writers who make the leap to mainstream. Dick didn’t have that many years left in his writing career, but did (perhaps unknowingly in many cases) have his work brought to a mainstream audience through the films ‘Blade Runner’, ‘Total Recall’, and, more recently, ‘Minority Report’ based on stories he had written.

William Tenn. On Venus, Have we got a Rabbi.
Originally in : Wandering Stars

SF writers frequently struggle to describe truly alien cultures. Many is the story I have read in which tentacled far-future aliens from the planet Zob appear indistinguishable from 20thC humans bar having a strange name. Here Tenn vividly described a strange, strange alient creature and culture. Through a monologue from a warren-dwelling exile on Venus, Tenn describes the head of a family struggling to support his family, to find an off-world bride for his sons, and for whom only the local religous leader can help his community maintain their ways in the face of oppression and tyranny.

Actually, I jest, for the person in question is Milchik the Jewish television repairman (I mean he is Jewish, not that he repairs Jewish televisions). His many troubles are further compounded by having visited upon him a group of very alien creatures from another solar system whose claims to themselves being Jewish are proving problematic for all and sundry.

Roger Zelazny. The Engine at Heartspring’s Centre.
Originally in : Analog

Charles Eliot Borkman was once a man. Once a spaceman, and once a hero. In fact he is still a hero, but whether he is a man is the point in question, for the plastic and steel and flesh creature that was created from that which was salvageable for a too-close visit to the Sun may or may not have a human heart. He evidently still has some human passions, as he displays when meeting a beautiful young woman resisting the death that is planned for her on the euthanasia island on which Bork has found himself. Can love conquer all?

Gordon Eklund and Gregory Benford. If the Stars Are Gods.
Originally in : Universe 4

Aliens enter our Solar System with a need to study our star. The human they choose to communicate with is intrigued by their claims that the sun, as all others, is intelligent. The human politicking, on a micro and global level contrast with the higher-level intelligence of the alien beings and their struggle to retain a foothold on life on a planet circling a far less friendly star than ours.

You can pick up copies of this book from the likes of eBay and abebooks.com alibris.com for next to nothing (the postage tends to cost more). So the question is, if you haven’t got this book on your shelves yet, what is stopping you?