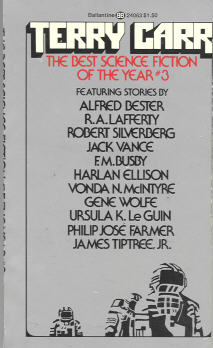 A satellite which develops a technical problem after launch is given an electrical jolt in order to make it work properly. The electrical surge has a more dramatic effect, and the satellite does a particularly good monitoring job.

R.A. Lafferty. The World as Will and Wallpaper.
Originally in : Future City

A world-encircling city is patterned after William Morris (he of the Arts and Crafts movement). The protagonist searches for the meaning of life.

Robert Silverberg. Breckenridge and the Continuum.
Originally in : Showcase

Breckenridge and colleagues trudging across endless wasteland, debating the nature of mythology.

F.M. Busby. Tell Me All About Yourself.
Originally in : New Dimensions 3

Dale reluctantly tries a necro house, and tries to find love, when only a more basic need can be fulfilled.

The DeathBird is unfurling its wings to encircle the Earth.

Vonda N. McIntyre. Of Mist and Grass and Sand.
Originally in :

On a desert world, a Healer tries her snake-magic on an ailing boy.

Gene Wolfe. The Death of Dr. Island.
Originally in : Universe 3

Adults and children with severe psychiatric disorders are put into a virtual environment.

Ursula K. Le Guin. The Ones Who Walk Away from the Omelas.
Originally in : New Dimensions 3

What price happiness for the majority?

Philip Jose Farmer. Sketches Among the Ruins of My Mind.
Originally in : Nova 3

An alien artefact circling the Earth causes increasing memory loss for the population of the Earth.