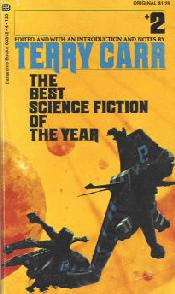 Frederik Pohl and CM Kornbluth. The Meeting. Originally in F&SF

Pohl finished this story on which he had made notes some fifteen years previously with the late Kornbluth. Harry Vladek and his wife have a son who is severely handicapped. Medical developments mean that a brain transplant is an option – will they take the healthy brain from a road traffic accident victim for their own son? But with the brain of another boy in the body of their son – will it be their son?

Matter Transporters, and global wealth allow people to spend most of their lives engaged in leisure pursuits of any kind, in any place. However, this future is a particularly unappealing one, as those who are benefit from it are shallow dilettantes. A woman whose attitudes and desires are a throwback to earlier times throws into relief the vacuity of their lives.

The wilderness offers a retreat from the violence of a near future society, and Pete is keen to ensure that he does not have to return to his city life. However, his short term stay in the wilderness, to film wildlife programmes for the television networks, is up. And he isn’t below seducing a scientist, a relationship with whom would give him a right to stay indefinitely, and in attempting so to do (he fails) he also fails to bring back the spirit of the wilderness.

Gene Wolfe. The Fifth Head of Cerberus.
Originally in : Orbit 10

Editor Carr picks this out as being the novella of the year, and puts it forward as a classic. I think time has shown Carr to have been correct.

Wolfe now stands head and shoulders over the vast majority of his contemporaries (and there are more than three decades of contemporaries!) and it is a rare treat to finally get round to reading such a classic. Carr points out the world-building, but for me it is the humanity in the story which particularly attracts. One of Wolfe’s techniques is to engage the reader with the protagonist by sticking rigidly to that character’s viewpoint throughout, and this story is no exception.

In a story redolent of Charles Dickens, we are acquainted with the early years of a young boy, unnamed, who is being raised with his twin brother, David, primarily by an AI housed in a robotic mechanism, known fondly by them as Mr Million. Their father is a mysterious person whom they see little, and there are further mysteries – the fate of the aborignals on the planet which the boys forebears, settlers from Earth, may or may not have made extinct.

The boy’s life changes when his presence is requested by his father on a nocturnal basis. His father names him ‘Number Five’ and carried out strange experiments, aided with hallucinogenic drugs.

As the story unfolds, various revelations unfold, some of which, such as the true nature of Mr Million and the emotion he feels at one point, are particularly striking.

As they boys grow older, their true nature is revealed (clones!) and a grimly gothic patricidal finale sees the young man imprisoned, only to return to the family home to follow in his father’s search for self-knowledge.

One of the few short story writers able to stand shoulder to shoulder with Wolfe, Silverberg gets into the mind of man who, being ugly, has major celebrity status in a uniformly beautiful world. But of course he, like every one, aspires to be equally as beautiful.

A psychiatric patient engages with a program which may, or may not, be of assistance in establishing his sanity.

Evidently one of a series of stories set in a far future setting of Cinnebar. Here, as above, a partying jet-set show that contemporary preoccupations will continue despite the passing of time.

Young Albert despairs of himself as being intellectually challenged. Everyone else is much brighter than he. But what the lacks in smarts he makes up in cunning, and his particularly unique ability is to create machines, far cleverer than himself, to do his bidding.

But his track record in this department is not a good one, as whilst creations are invariably wonderful in their complexity and intelligence, they do not make him a happy or successful person. Until we reach the end of this blackly ironic tale, in which he finally sees the rest of the world as being there for the taking.

Being the first man to have sex in space is a challenge to a young American astronaut. To have sex with a woman of course, as membership of a Several Mile High Club (Solo) is not something to brag about.

The opportunity appears to present itself on a mission which includes an attractive young companion, but the woman sees herself as more than a notch on his bedstead.

The viewpoint in this short story is that of a female Raven, low in the pecking order, who finds that the scientific intervention of humans enables her to rise from Omega to Alpha.

A lengthy story, in which a new artform, the sensatron cube, enables those with the rarest of talents to create three dimensional ‘sculptures’ which have an emotional impact on the viewer, provides a wealthy art patron to have his beautiful wife immortalised. However, the artist’s model and the model find themselves drawn together.

The story takes a surprising twist at the end, when artist and model appear to have disappeared into another dimension, leaving only the final piece of art for the patron to marvel at.

A strange man, exiled in the desert, stumbles across two young people. He welcomes them to his humble abode, but the outside world catches up with them, killing the young boy, and leaving the young girl with no option but to flee his company.

The first novella which formed the beginning of the novel ‘The Forever War’. Elite human troops are prepared for combat with the alien threat in truly inhospitable conditions. William Mandella survives the training and the first contact with the aliens, a brutal massacre of largely unarmed enemy.

Robert Silverberg. When We Went to See the End of the World.
Originally in : Universe 2.

Against a backdrop of a society crumbling into crime and anarchy, the dinner party set swop notes of the latest de rigeur holiday destination : the end of the the world.

An unsettling story, in which a human, immune to pain, is forced to undergo horrendous acts of atrocity on himself on alien planets to which his ship and AI take him. He finally rebels against this, and forces, painfully, the AI to try and find his home planet. They do finally return to Earth, but he finds out that there is one thing which can cause him pain – Earth itself, and his exile from Earth was doubtless intentional.