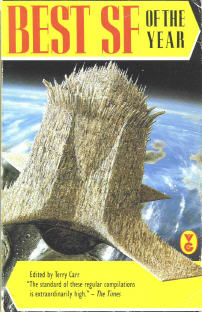 Valparaiso, an orbiting ‘safe-house’, inhabited by criminals or others with secrets to hide. One visitor, without eyes, but far from blind, is seeking the person responsible for making him that way.

Experimentation in time travel to alter the course of history has enormous impact on the present and the future – on a global level, and for the protagonist and his love for Aymara.

John Ingolby, prominent churchman, develops what at first appears to be a halo.

A re-working of the Tarzan story, from the female (and lesbian) perspective.

High tech data heist leads to the Prison of Chillon, and the eponymous prisoner, imprisoned by his disabilities and more.

Harry Turtledove. And so to bed.
Originally in : Analog, January 1986

The diaries of Samual Pepys viz. finding the Missing Link in the Americas, and the slavery of those thereof.

Anna Louise Bach, Lunar Spacewoman (and evidently heroine of other stories) plays a key role in rescuing a long-lost girl (and her dogs) from an orbiting research station.