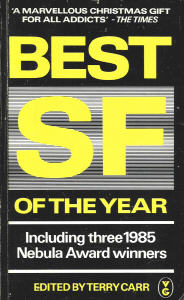 An off-beat look at the laws of probability.

Eratosthenes in ancient Greece is coming to the conclusion that the earth is round. He is aided by an extra-terrestrial.

Disturbing aftermath of WWIII, in which the relationship between a father and son changes throughout the day.

George Alec Effinger. The aliens who knew, I mean, everything.
Originally in : Fantasy and Science Fiction, October 1984.

The nuhp arrive, and are soon irritating the hell out of their guests.

Tanith Lee. A day in the skin, (or, the century we were out of them).
Originally in : Habitats.

Disaster on a far-off planet leaves the Company with a radical option for dealing with too few bodies for the frozen egos held in the computer.

A set of extra-terrestrial instructions which have to be followed to the letter. But to what purpose?

An alternate history in which the pilot of the Enola Gay is unable to go through with his mission.

Bio-genetics and the use of vegetables.

One of the few women left masquerades as a man in order to survive.

Twins are used in an attempt to achieve a trance-like state necessary to summon God.