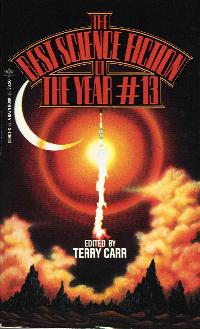 Frederik Pohl. Servant of the People.
Originally in : Analog February 1983

Old Time SF from an SF Old Timer. Robots are becoming integrated into society, becoming emancipated, and indeed, standing for elected office. But what of those humans in office?

Alien artefacts appear on Earth at random, either disappearing after a period of time or occasionally exploding, leaving a seared circle of devastated land. One young person is tied to one of these ‘slow birds’ and disappears. He returns many years later, still young. He finds his now aged brother, a religious leader, and tells of his experiences and the war that Earth is in danger of losing.

A dying star is being mined, with a weird mining community eking out an existence on the hot crust. A genmod pianoplayer, a Mirror who mimics those he meets, is caught up with the blind Pearl, and the evil miner responsible for her disfigurement.

Nebula novella winner, and rightly so. A complex far future scenario in which humans are being selectively bred and genmod to fight a brood mind menace.

Robert Silverberg. Amanda and the Alien.
Originally in : Omni May 1983

A shape-changing alien, escaped from a detention camp, has the misfortune to run into Amanda.

A couple living on an island shelter from a hurricane -and when they come out they aren’t in Kansas any more Toto. A sun-worshipping Aztec prince is washed up on their beach.

A young woman forms a relationship with a ‘ghost’ – a woman from some generations past when an immortality treatment was devised. She enables the woman to escape her shackles.

The stakes are high in a gambling den which is licensed for more than monetary transactions.

Scientists exploring ESP in rats are faced with evidence of paranormal activity. One scientist debunks that activity, whilst evidence of fiddling the test results is thrown up.

A homo habilis turns up in the deep south. He is befriended by an artist, but his arrival otherwise upsets the locals. Adam, as he is named, shows more humanity than the more advanced species.