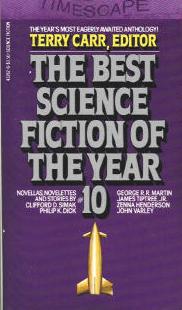 These story summaries were writting somewhere between 1990 and 1999.

Dee, with her genmod cat, Ripotee, are fleeing in the last of the family’s spaceships, fleeing a treacherous sister and her partner in crime. The planet New Niger offers a potential haven.

First contact with a spider like race through a black hole. Communication is not easy, and understanding their motives even more so. Abigail is deconstructed, piped through the black hole, and reconstructed on the other side. She is offered a multitude of possibilities.

Dick ponders once again upon the nature of reality, in this instance using the device of a 10-year suspended animation trip which goes wrong, leaving one unfortunate soul conscious and in contact with the ships computer for that period. The AI attempts to keep him sane through reliving his earliest experiences. When that fails, looking to planetfall is the next resort.

A slightly different coming of age story, set on (or, more accurately, under) the moon, in which a teenage boy and his personal tutor (much older but also in the guise of a 13 year old), against a backdrop of a controlling AI, sex, gender changes, go their separate ways.

Experimentation with telekinesis and magic spells open up a window on what appears to be an idyllic bygone years cottage. But when one of the researchers makes contact, the true nature of the family living in the cottage is revealed.

Zenna Henderson. Tell Us a Story.
Originally in : Fantasy and Science Fiction, October 1980

One in a series of stories about The People. Having crash-landed on Earth, aliens with telekinetic powers struggle to gain a foothold on our planet. In rural America, one group of The People are able to help, and are helped by, a struggling farming family.

The technocractic state of 2219 allows people to visit hypnotically/VR religious events. One such person begins to find it increasingly difficult to differentiate between virtual and real.

On Earth, as a boy, the Aborigine Kundekundeka fails his rite of manhood walkabout. Many years later, on the planet Mars he is able to absolve this original failure.