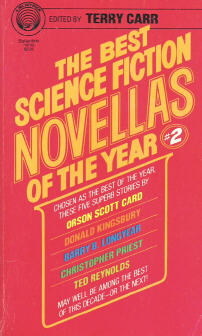 The second, and last, in Carr’s short-lived attempt to run a Year’s Best SF Novellas alongside his established short SF anthology. In retrospect, this collection of five stories can be seen as lacking a little in commercial oomph, and no really big names amongst the authors.

Nebula Award Winner: Best Novella 1979. Willis Davidge, human, and Jeriba Shigan, Dracon, are pilots, whose dogfight ends with the two representatives of warring races marooned on a small island. They are forced to work together to survive, and an unlikely friendship develops, each confronting their prejudices. A further dramatic event causes a closer human/dracon relationship, and the story ends with a dramatic (if schmalzy) denouement.

Donald Kingsbury. The Moon Goddess and the Sung.
Originally in : Analog, December 1979

Diana’s ambition is to reach the moon, and she had to face many challenges in order to get there. Many of those challenges involve men, whom she uses and is used by, in order to achieve her goal.

The Flux Channel Park offers time-travel day trips for the quasi-Victorian populace. Bridges which cross the Flux enable visitors to the park to go a day forward or back in time. Young Mykle on one trip finds himself much further in the future, and begins a lifelong unrequited love affair/obsession with a young woman.

A prequel to ‘Mikal’s Songbird’, telling the story of the early days of human songbird Ansset.

Mankind is faced with a returning space ark, millenia old, and Checker Pilot Cotter Oren investigates the vast habitat. The story attempts a slightly light-hearted approach, which jars a little.