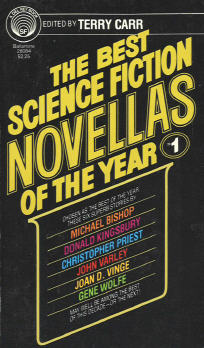 Prior to the launching of Gardner Dozois’ jumbo-sized ‘Years Best SF’ series in 1984, the annual anthology market had consisted of considerably slimmer volumes which could squeeze in nine or ten stories at best. Terry Carr was several years into his annual collection series, which had started in 1972, when he experimented with a companion publication, consisting of half a dozen novellas. The series lasted only two years.

John Varley. The Persistence of Vision.
Originally in : Magazine of Fantasy and Science Fiction, March 1978

During a slight economic upturn, the protagonist hits the road. He finds himself living in a community of deaf-blind people, but it is he who is cut off, not they. He tears himself away from the community, painfully, only to regret it. (Nebula Award Winner: Best Novella, 1978. Hugo : Best Novella, 1979.)

Against a background of domed cities, in the author’s UrNU series, a new member joins an intimate group of residents of a retirement home.

A Moslem visitor to the ruined USA finds himself becoming intimately involved with the dust, decay and depravity to which that bastion of western civilisation has descended.

Generation-spanning tale of an Engineer who dreams of reaching the stars.

Ethan Ring and his alter ego, Michael Yarrow, have a third party sharing their body, ETHANAC, a high powered computer linked into him/them. They have fled Earth, but their past catches up with them,and they are involved in some espionage and double-dealing involving another whose persona is similarly linked.

One in the author’s Dream Archipelago milieu. Yvann Ordier appears to have everything – wealth, a beautiful partner, comfortable life. But he is drawn to spying upon the secretive race of peoples living nearby. As he becomes further obsessed, the nature of him as simply an observer comes into question. Is he more of a participant? Are the rituals which he is viewing from afar being enacted for his enjoyment.