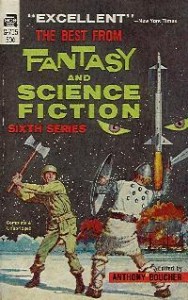 This little beauty beckoned at me from the shelves of a second-hand bookshop in Colchester recently. How could I resist a cover like that! And a book that showed no signs of having been read. Fantasy and Science Fiction published annual collections for almost 25 years, since when they have published collections every 3-5 years. So what does this volume tell us about the stage of SF in 1957?

Prof. Konrad Leuten, author of the bestselling book on ‘Functional Epistemology’ is on a dangerous mission to undo the work of one reader who has taken his teaching a little too far, and a little too literally. His defence against the do-gooding zombies: standing on one leg and thumbing his nose.

One of the pleasures I get from reading older collections such as this is that of coming across authors whom I haven’t read before.

Mildred Clingerman is one of several such authors in this collection of 15 stories, sitting alongside some very big names. Her offering is a touching tale involving an elderly lady who journeys often on a local train in attempt to find again that mysterious station at which her (Yankee) betrothed alighted and disappeared from her life so many years ago.

A peek in the Encyclopedia of SF informs me that Mildred Clingerman’s stories (she was not prodigious in her output) were known for their “sometimes sentimental cuteness”. Very much so!

Anthropological SF, 1950’s style. The setting is a Mars of a Barsoominian nature, with a shapely green lurve interest of a Dejah Thoris type female Martian (Martianette?).

A scientist struggles with one of the other Martian races, whose customs and language are a barrier to fully understanding their lack of difficulty with the insects which cause everyone else problems.

Interesting from the point of view of the societal and cultural elements on display (those of the Earth people, not the Martian ones), although less for the ‘set the problem up and then solve it’ story.

But praise for the author for including a character called A. Bulsiter!

The Memoirs of Dr. Mainauduc, Mesmerist, offer a tantalising glimpse of eighteenth century London: who is the somewhat eccentric gentleman farmer who is desirous of the mesmerist’s attention. Could it possibly his royal demented majesty?

Enumerators with extra powers – and hardware to match – come across one individual who defies categorisation.

A US marine stationed near Reykjavic suddenly finds himself a thousand years back in time. Taken in by a landowner, he struggles to adapt to his new life.

He finds that whilst he has a smattering of knowledge in several areas, none is sufficiently deep to be of any use. Cultural obstacles get in his way, and his stay is short and brutish. The story vividly portrays the difficulties Sgt. Roberts faces, told through Ospak Ulfsson of Hillstead. The cover illustration in this mid-1960s reprint does not do the story any justice (!).

Madeline is bereft after prematurely losing her husband Tom. But the bureaucracy involved in ascending to Heaven can at times prove problematic. Or not, as the case may be.

The story reads like a somewhat stilted 1940’s stage play.

The Silk and the Song. Charles L. Fontenay.

The descendants of human settlers have been reduced to beasts of burden and transportation by the native Hussir. Except for a small band living wild, who have a couple of ancient artifacts and nursery rhymes linking them to a more glorious past, a past to which the Star Tower stands mute testament.

Young Alan risks all to flee his owner, and is able to play a key role in challenging the Hussir and reclaiming humanity’s destiny.

A particularly strong story which holds up well.

A Big Name – although, interestingly, the Narnia series was still a series in progress when this story was written.

Lewis has his tongue firmly in cheek as he describes an Oxford don (Lewis was a Magdalane man) whose mysoginistical disappointment at having an ex-student visit with a female companion takes a turn for the worse as he is transported into the world as perceived by the young lady: shops and boutiques are in sharp focus – the rest of the world a gloomy grey.

The Last Present. Will Stanton.

Touching story of a boy who is camping up on the mountainside, waiting for his bithday tea-party, hoping for an .22 gun for his birthday present. But when he returns to the town, he finds little to celebrate.

The longest story in the collection and perhaps the least successful by today’s standards.

People and airplanes are disappearing, some to return minutes, hours, days or weeks later, if at all, suffering from amnesia. Hesione Hadstone, actress, is enlightened by Number 3 SF Fan Alonso Peterberry, and then finds herself plunging in an out of some far future/alternate realities which are far from pleasant.

She finally solves the riddle, which revolves around mankind needing to learn lessons about its moral behaviour.

A Last Couple on Earth tale – and therein lies a tale. (Or not as the case may be). This is a very short story, and the twist is that the Last Man on Earth isn’t any more. The unkindest cut of all. (But how does a eunuch get to New York City? I know that they are strange in NY, but surely not that strange?)

Extremely clever parody of Robert E. Howard’s Conan: in this case, Cronkheit the Barbarian finds his manly ways slightly unappealing to the beauteous Empress, and his fighting style a liability to the army.

And Now The News. Theodore Sturgeon.

MacLyle develops an unhealthy obsession with the news – reading the newspapers, listening to the radio broadcasts, watching the TV bulletin. When his wife decides enough is enough and she removes the tubes from the various TVs and radios throughout the house she precipitates a total breakdown.

MacLyle takes to the mountains, cutting himself off from the mankind which he had been so absorbed with. He turns to pottery and painting, and playing an obscure musical instrument.

Help (?!) comes in the form of a psychiatrist, who uses drugs to calm him down and to bring him back to his former self. However, instead of taking on mankind’s wrongs through the news, he decides to fight back.

The man destined to be the first man on Mars is visited during his last night on Earth by visions of his soulmates through history.

An interesting range of stories, most of which are very much of their time. Mr. Sakriston’s Halt, King’s Evil, and The Silk and the Song stand up well to the test of time. Others are to varying extents interesting reads in terms of how SF has changed in the 40+ years and in the picture they paint of 1950s America.