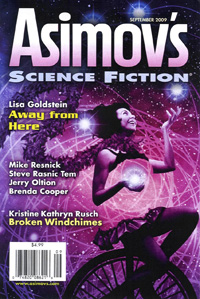 Lisa Goldstein. Away from here.

A story that in a few years you would swear blind appeared in F&SF. Fortunately Best SF is here to keep track of these things. A young daughter works in the family-run hotel, under the ever watchful and disapproving eye of her mother. When a strange, very strange group turn up, without having booked ahead, things are turned upside down.

Teen angst in a near-future in which everybody and everything if ranked and rated in real time. Battling his hormones, young Vic decides that the title of World’s Best Lover is the one he should aim for, and targets a female fellow student. She plays havoc with his strategy, but opens his eyes to a more liberating future.

The detail of Vic’s previous attempts to achieve success, and the rankings he attained, is perhaps overdone in the earlier part of the story, but is left behind in the latter part concentrates on the the budding relationship.

A rather retro and somewhat mawkish take on the nature of the human soul, and whether a robot made of chrome and with mechanical parts can also be said to have a soul. A widower who has hit the bottle following the death of his wife befriends a robot who works the night-shift in the factory where he works. He opens the robot’s eyes to what it is to be human, and the robot returns the favour.

Brenda Cooper. In Their Garden.

A young girl rails against the walls that keep her from the outside. Her elders, and putative betters, have been insisting that she remains within the walls, for that which is outside can only hurt her. However, the situation is at an impasse, as she can no longer accept the constraints under which she lives, and they have to choose whether she must be let to decide her own destiny. A situation every parent has to face in due course. It’s not a hugely original idea, and is ok as far as it goes, but it doesn’t go that far.

Sent back in time to make changes for the better of humanity, an operative is faced with a mission that involves temporarily kidnapping a young girl. Does he carry out the mission, or follow his heart, something which we now about through his remembering the family he will have in the future. A touching and effective story in which the protagonist comes across as a believable person, rather than a character through which a plot is delivered.

A house AI is under threat – in AI terms it is now dates, indeed it is outdated. Will it simply be replaced and consigned to the scrapheap, or is there a future for it? Neatly handled.

A chance collision on a sidewalk gives a wannabe guitar hero an altogether different outlook, as having unwittling been given his heart’s desire, he has the chance, as a mega-famous rockstar to achieve the heart’s desire of the woman who bumped into him and who inadvertently transferred the granting of her heart’s desire to him. It’s a short piece which gets across the central conceit quickly.

The lengthiest story of the issue, and the strongest. There’s a lot of world-building, background and character in the story, set around the not necessarily immediately engaging backdrop of opera.

The protagonist is a male soprano, who has achieved fame and fortune for a quarter of a century on the planet Pane, whose inhabitants are the ultimate demanding audience. Living for so long in a world dedicated to absolute musical perfection, has he been corrupted through suddenly discovering a form of human music that comes from the heart and which does not require perfection.

Leaving Pane behind, we follow the singer off-planet as he becomes entranced by music from earth’s history, but in doing so he unearths some truths around his life, and how the Pane’s methods of recruiting their sopranos leaves a lot to be desired.

I picked up more musical theory through this story than in a couple of year’s of studying music at school. In my case the term ‘studying’ is applied loosely, as most of the time was spent in fear of the corporal punishment being dished out at any excuse by a hunchbacked music teacher who seemed to get some kind of perverse pleasure in inflicting suffering on the young boys in his ‘care’.

The Goldstein and Rusch stories start and finish the issue strongly, with the other stories being good without being great.