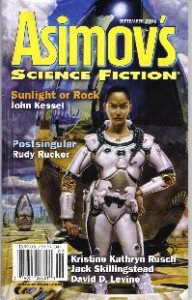 A return to reading the print version after several months reading e-versions, and a welcome return I have to say. There are advantages to e-books, but I much prefer reading a full page rather the paragraph or two that is generally available on a handheld device.

A sequel to his ‘Stories for Men’ (Asimovs Oct/Nov 2002), which was itself set in the female-dominated milieu of ‘The Juniper Tree’ (Science Fiction Age, Jan 2000, and reviewed here when it appeared in Dozois’ 18th. This story follows the exiled Erno from ‘Stories for Men’, although certainly for me, a gap of four years between stories means that I have only the vaguest recollection of what happened in that story!

However, the link with the ‘gender-differentiated anarcho-social democracy’ from the earlier stories is essentially a historical one, which rather means that the story neither works as a continued story of the main protaganist, nor as a continuing development of that previous setting. This in effect turns the story in hand into a singleton.

As such its an okay story about a young man in a financial struggle with a menial job and very limited prospects. His neighbour in his cheap hotel has invested in a very hi-tech cyborgised hand, and rather than Enro finding his own way out of the hole he is in, it is his neighbour who, quite literally, gives him a hand.

Jack Skillingstead. The Girl in the Empty Apartment.

A strange, unsettling (and quality) piece, seen through the eyes of a young man who was abused as a child – not so much a survivor, but a refugee from that past. The world is an unsettling place for him, but with Homeland Security very interested in those who may be hosting uwnanted thoughts or even visitors, who may, or may not be causing disappearances, he’s facing a double whammy. It’s a sort of Woody Allen meets Taxi Driver, as the titular girl points out during the story. So Joe has been fucked up by the past, which wasn’t all mom’s Apple Pie, but rather dad’s belt and dad’s pistol. The present doesn’t hold much for him. Maybe the girl and the ‘harbingers’ offer a better future for him, and maybe a future for humanity?

If the previous story was Woody Allen meets Taxi Driver, this would be Deliverance meets Harry and the Hendersons…

Plot-wise, a scientist is called in by a good ole boy in the mountains, who believes there is something anomalous in the nearby woods. Once on-site, the scientist is duly manacled as the g.o.b. clearly believes he is onto something big, which he wants to keep to himself.

Sure enough, the shackled scientist is able to track down a small group of as yet unknown to science, tool and fire-using primates. And then the scientist has to decide where his loyalties lie.

A retired school librarian revisits Mexico, some fifty years after her honeymoon, and touches the Aztec Sun Stone, part of ancient sacrificial rituals. Months later her visit to Mexico appears to have caused a malignant and pernicious melanoma, and the Sun God draws her into those ancient ways, and she sees the strength of the Mayan beliefs very much first hand rather than through history books. An effective, deep and layered story.

Carl Frederick. We Are the Cat.

The editorial intro points out that Frederick has appeared regularly in Analog, but that this is his first appearance in Asimovs. That immediately put a seed of doubt into my mind, that this would be an Analog-y story, which is the conclusion I duly came to – but whether than conclusion was influenced by that prior knowledge, who knows?

I would put it to you, the jury, that the Analog-y elements are

The predicament is that they are potentially trapped after a rockfall whilst caving. Being physicists they are able to ponder Heisenberg and Schrodinger’s Cat, and are, as observers, able to affect the outcome of the observation. Can’t recall if the cat escaped though, so presumably it’s either free, or not….

Historical fantasy with a difference. There are strange visitors from afar, but the high-born in the court do not spot just how different. It is the chambermaid, who has a more fundamental view, who is surprised at their non-use of the chamberpots, and who questions what they are. When one appears to have helped her disabled child, she has to find out whether these visitors or angels or devils – or merely v-e-r-y constipated medics? Or mayhap they are something not of this Earth?

A sequel to ‘Chu and the Nants’ (Asimovs, June 2006). In that earlier story, Chu’s father had a role in letting loose Nants (bio-mimetic self-reproducing nanomachines) onto Mars, which ended up causing a whole heap of problems for humanity, as said Nants enclosed Mars, Earth and the Sun in a humongous Dyson Sphere, and then started uploaded humanity to a virtual status.

A few years on and Chu’s father, Ond Lutter (anagram : old nutter?), himself someway out on the autistic spectrum, but not as far out as his son, decides to let loose ‘orphids’ – not exactly Nants, but equally problematic. His wife is far from happy with him doing this, as are the family they are having a bbq with, and in fact a lot of humanity gets pretty pissed off as the orphids rapidly spread across the globe – particularly as they interface with humans and allow us to see a lot more than we are used to.

The story skips perspectives, as there is a blurring of what is real and what is not, and who is who, but whole new dimension appears (literally) as a gateway to another quantum Earth appears, and, in the end Chu and his dad find themselves happier in this new world, Chu’s mum happier in the arms of the hunky Jose.

A novel of the same title as this story is due out shortly, presumably equally as gnarly.

Skillingstead, Allen and Rucker provide the goods for me from this issue, boldly going into less well chartered waters. The others are fine as far as they go, although they go into waters well mapped and more frequently travelled. I won’t maintain the metaphor any further, as It’s making me feeling somewhat seasick…