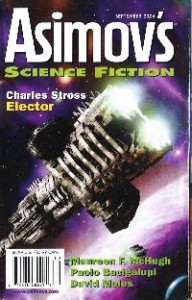 Sensitive story about three generations of women growing apart, through the eyes of Clara, the middle generation of the three. She is having to give up her mother, whom she is slowly losing to Alzheimers. And she is having loosen the ties with her daughter, who is moving from childhood to young adulthood. Her daughter rebels against the fact that she has an implant which allows her mother to monitor her whereabouts (ha! just wait until she has children!).

The hi-tech implant is the sfnal element and is probably not sufficiently advanced over what we have not to be really sfnal, but for the quality of the story, I’m not going to moan.

A far distant planet, the colonists of whom have been left to themselves for many generations, is being fought over by two more advanced human factions. We follow the rivalry from the viewpoint of one of the factions, through someone who has been masquerading as an academic and who has developed a more than platonic relationship with one female student. As the rivalry spills over into open warfare and bloodshed, the roots he has put down on the planet make it difficult for him to flee, as the rest of his party do.

The story has that somewhat condensed feel which many stories which feature a lot of action in relatively few pages – we have the quick set up, and then pell mell into attacks, escapes, dramatic cable car action etc.

3.5 page short story in which human tourists are unwittingly fleeced by some very aquatic tour guides.

This new author has had quick success, and he adds to it with a story quite different from his others. A slight criticism is that the arid desert setting and intersposed quotes from wise religious leaders makes it feel very Dune-y. However, Bacigalupi builds up a very claustrophobic setting in which a young man who has studied in a rival community returns home as a wise man, to confront his match-making mother and his warmongering grandfather. Bacigalupi cleverly leaks out a bit (but only a bit) of information about the setting (we’re not talking about a far distant Arrakis), and provides a twist in the tail, which marks out the fact that this is more than routine SF.

Y.S. Wilce. The Biography of a Bouncing Boy Terror.

Think of a Paul di Filippo/Roald Dahl collaboration produced after an evening finishing off a bottle of mescalin, and you have this story. British readers over 40 may also imagine a Dr Stanley Unwin/John Lennon collaboration in similar circumstances.

Gonzo to the max, my humdingerdoodles.

A toddler, born 18months previously out of a golden egg, is obviously something special to his elder sister, herself only a young child. However, one day a strange man turns up at the remote Australian outback and she knows that she is going to have to fight to help him.

Their father believes there is no option but to surrender to the fate mapped out for him before his birth, but his daughter and his stepson have different ideas.

A two-pager, providing a crafty look at just how we might spot those from the future who are amongst us, but who might not be 100% sure of those little social things we do.

Stross’s ‘Accelerando’ series begins to draw to a close, with this penultimate installment. The various generations of the Mancx family are brought together, including some from different branches, and as the AI at the centre of the solar system begins to threaten their existence, options for escape have to be planned. Roll on the next episode!