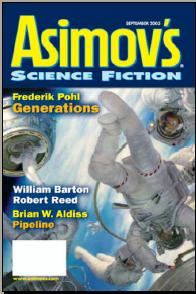 A hand-tooled review, taking advantage of a) something like 12hrs on the train over two working days b) no family to hand c) laptop’s limited battery life exhausted. So out came the pen and paper – and if your eyesight is good enough you can see the rolling countryside of SW England underneath the scrawling handwriting.

A story which from the outset evidences itself as being written by a Grand Master. A multi-perspective story, the first viewpoint of which is from that of a physics teacher who, much to his surprse, is able to win the heart of a businesswoman who he meets on a flight to JFK whom he assumed was way out of his class (literally so as she was in First Class). We follow their burgeoning romance, fuelled by her interest in physics, to the moment when they get engaged and she announces her pregnancy.

What was interesting is that coming back to the story to review it, I was surprised at just how short this part of the story was, as the memory of the emotional engagement wiht the character was quite vivid, belying the short amount of time spent with him.

The next section sees a big shift in the tone as Pohl extrapolates from 9/11 and subsequent events a major war between the West and Arab terrorists (sic), with the USA very much on the defensive and almost like a West Bank settlement with conscription and a siege mentality in place. The leap from the first sequence is a big one, which is my excuse for not catching on straight away to the link between the sections, which is that the young woman whom this section focusses on is the child whose imminent arrival was announced in the first section, and her father, the near-retirement long-widowed physics teacher is one and the same as the first section’s narrator. When Pohl helpfully drops a hint at the end of this second section, enabling us dufi not up with the pace, it was for me a genuine ‘oh’ moment as I realised just how the promise of the young lovers in that first section was cruelly dashed. We subsequently, through the eyes of her husband, see this second generation loving relationship similarly crumble, as the price paid by the USA to end the war, and his role therein, is a price too high for her to accept.

As if this isn’t enough, Pohl then hits us, and the protagonists, with a double whammy, as no less than the underpinning physics of our universe begins to unravel, leading to the inevitable conclusion that we are indeed simply a simulation being run by intelligences far beyond our ken. Whilst faith crumbles in the fact of god-damning evidence, there are others (again linked to the main characters) who are more than able to make the most of the situation, leading a bleak future for all concerned.

A standout story. What is impressive is that Pohl takes the physics element of the story, which could easily have been done as a ‘lab-coated scientists discover we are not alone’ story, but sets it in a (sadly) believable current setting, and looks at how both of these elements will impact on individuals and society.

I’ve just finished Aldiss’ ‘Sanity and the Lady’ (review), a lengthy literary chapbook which follows a very middle class English family within whose minds alien intelligences co-habit. That story ended with a slightly creaky kidnap/escape, as does the story in hand. Carl Roddard is a thoroughbly unlikeable character who will go to any length to ensure that the oil pipeline his company has built in Turkmenistan starts to pump its liquid gold to the West. His scruples are so lacking that he, without hesitation, hand over a dissident to the brutal local regime in order to grease some palms. Having ensured the safety of his operation, he decides to drive the length of the pipeline, back to the West and to his ex-wife, whom he believes needs to review her life choices. As he takes his journey we see the impact of his pipeline on those countries it passes, and the ‘terrorists’ who threaten it. However, the crux of the story is a somewhat implausible kidnap of Roddard, in which the businessman shows cunning which would do James Bond proud in escaping his captors (who, duh, forgot to frisk him to see if he was armed). Having escaped he then continues, barely alarmed, to continue his arrogant Western ways. Suffice to say that when critiics are reviewing Aldiss’ substantial, high quality oeuvre, this story won’t get much coverage!

A well handled, clever take on issues of identity, which only gradually (and to good effect) explains to the reader exactly what is happening. At first it would appear that the body of a young woman is now playing host to another person, who is far from happy at her putative role as the daughter of the parents in whose body she is. An upload into the body of brain-dead accident victm, perhaps? But the answer it much more subtle, as the daughter in fact OD’ed on a drug which has had the effective of essentially wiping her personality and memory. Two years’ therapeutic intervention has resulted in a new persona for whom her previous self is a stranger. She has to come to terms with who she was/is/will be, as do her parents, as we follow them through some painful moments in the journey to some kind of resolution.

Barton follows the footsteps left by Stephen Baxter in SF’s regolith in beating a path to a mini genre of Alternate History of Space Flight. Baxter, in producing a large number of such stories (collected in Phase Space), scored over a lot of Alternate History in producing stories with plot and with characters with whom you could engage – whereas the poorest Alternate History does little more than essentially list different events and personalities in those events).

Barton follows Baxter’s example, and sets up an intriguing scenario in which a NASA astronaut is in his tenth year on a moonbase in the late 1960s. We find out about him, his desires and hopes, and how his mission has been much, much longer than anticipated. The detail of the camped moonbase is handled expertly – you can almost smell the sweaty jockstraps. A Russian mission to return him to Earth goes awry, but in the dramatic element of the story, he is able to save one of the two cosmonauts. More interesting is how Barton gets into his head, showing just what has been driving him, the huge sacrifices he has made, and how he will sacrifice more in attempt to push out further, to Mars. You kind of hope that with people like this, as opposed to some of the characters in the Pohl story, humanity may just have a chance!

Reed has the happy mortgage-paying knack of turning out a lot of neat, effective stories which provide interesting and usually unique takes on future possibilities, just slightly different from well trodden sf tropes (and boy, you can smell those well trodden sf tropes at times!). Here he looks a human uploading to attain virtualy immortality, although his Finished are those humans who upload into artificial bodies – extremly lifelike and repairable bodies. The protagopnist is onesuch, and we follow his relationship with a young woman who finds herself considering following his footsteps and becoming Finished. Reed explores taking what making such a decision must involve, and captures evocatively the feeling of entering the clinic to undergo the process on a bright, cloudless, blue sky day, and having that feeling for eternity.

The first published story by Olsen, but the story does rather suffer from being alongside some very assured pieces. The alien Hydrian are on Earth, and a company employee is charged with purchasing several works of Terran art, starting with a number of works by Edvard ‘The Scream’ Munch. (You can tell the aliens are up to no good as they are snake like). Company politics, in the shape of a younger employee lower down the organizational food chain being bent on usurping his position in the firm and his lover, and the Hydrian need for urgency, and a sneaking suspicion that all of humanity’s art may be headed offworld are the stresses on the employee. None of these elements are really covered in sufficient depth, whilst throughout there are descriptions of the paintings which don’t really add that much to the story. There is a bit of a dust-up at the end, and the employee finds himself in effect in a situation which is visually identical to The Scream is thrown in, although for what purpose I’m not sure.

Its a reasonable first story, but has that feel of a tyro writing trying to do a little too much and not quite pulling it off.

Lou Antonelli. A Rocket for the Republic.

A monologue in which a Texan old-timer (a very old-timer) relates how in the middle of the last century an English scientist arrives and sets up a rocket base nearby, and called upon his services which ended up with him not only helping but a co-passenger on the first (and last) rocket journey of the 19th century. We hear how the journey ran into trouble, but was rescued by aliens, who fixed the old-timer when he got too close to their stardrive power source for comfort, and fixed him in such a way that we he returns (alone) to Earth, his longevity is assured. The monologue enables the tale to be told quickly, although without the impact that a ‘proper’ narrative would have done.

Strong stories from Pohl, Gregory, Barton and Reed, with the standard they set not quite matched by the offerings from Aldiss, Olsen and Antonelli.